The weekend of May 21-22 was a long but productive one for leaders at IMAN. Just two days after celebrating the probable takeover of an abandoned home plaguing the block next to IMAN’s office, nearly 30 staff and leaders gathered for the first IMAN Community Organizing Training of 2011. The training brought out leaders from different Chicago communities, as well as a diversity of professions, backgrounds, and experiences. IMAN’s training is a unique blend of the traditional organizing methods pioneered in Chicago and the Prophetic principles of compassion, service, and justice. This first training was specifically aimed at equipping community members with the proper tools to move IMAN’s Muslim Run campaign forward.

The one and a half day training was hosted in Hyde Park at the Catholic Theological Union, for whose continued support we are very grateful. Attendees entered the building greeted by beautiful Arabic calligraphy engraved on its ceiling. The setting itself emphasized IMAN’s commitment to inclusiveness and spoke to relationships built throughout the years with faith-based institutions in and around Chicago. The training began with help from Don Washington, a speaker, instructor and former Community Organizer at the Community Renewal Society. He led participants in an exercise called the Melian Debate in which he used a historic encounter between the Athenians and Melians of ancient Greece to move participants. It opened their eyes to the importance of each one of them helping themselves and others bring about positive change in their communities and environments. If not, the Debate stressed, they would forever be silenced, as was the fate of the Melians in the face of a much stronger Athenian army.

The first tool of organizing that leaders were introduced to was the sharing of histories and lived experiences. Facilitators broke attendees into smaller groups for more thorough and intimate discussions. With this, facilitators and participants were able to learn about each other’s experiences of injustice and oppression, and how they related to our global history. With a timeline of historical instances of injustices and oppressions that was provided, the participants placed their experiences under the year it happened – showing how even things on a global scale affect each of us on a very personal level.

Each session introduced a new tool the participants would need to equip themselves with as leaders. Each tool allowed them to self-reflect as well as understand the self-interest of their peers in order to foster communal relationships that can develop into vehicles for social change. While IMAN’s Community Organizing Training serves the general purpose of developing leaders and preparing individuals to spur their communities to action, it’s also a reminder of IMAN’s core principles and an example of grounding community organizing in a Prophetic model. Leadership by those most affected is heavily stressed, as well as socioeconomic and generational diversity, alliance-building, service and art. If you were unable to attend, we encourage you to look out for our second training of 2011 in the fall.

IMAN hosted its 3rd biennial Arts & Culture Retreat from Tuesday, April 26th to Thursday, April 28th in Lake Geneva, WI. More than 80 participants from all over the country, Europe and Africa attended the Retreat this year. They represented artistic disciplines and genres such as spoken word, poetry, hip hop, music, dance, filmmaking, visual art, and comedy. The scholars who attended the Retreat this year were Sh. Abdullah Adhami, Prof. Asifa Quraishi, and Imam Suhaib Webb. Many of the attendees were returning participants from the previous Retreats, but there were also a significant number of new artists and scholars. 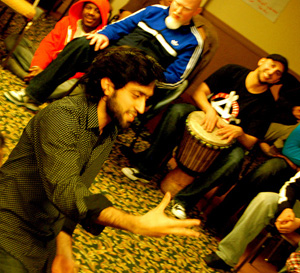 After prayer, the Retreat opened on Tuesday with IMAN’s Director of Arts and Culture, Asad Jafri, presenting an overview of IMAN’s history of engagement with the arts over the last 15 years. Connecting that history to the current Retreat, he talked about how its agenda had been designed to build upon the work done and relationships established at the previous Retreats and IMAN’s general work in the arts in the recent years. Jafri reminded the attendees that two specific issues discussed at the last Retreat were the formation and function of a national Muslim arts council and a Muslim arts collective, and announced that the first IMAN Arts Council was formed earlier in the year and that ideas and plans for the Muslim Arts Collective were going to be the main topic for discussion and exchange during the working sessions of the Retreat.

The work of the Retreat started in earnest after the opening session. Each working part followed the pattern of: (a) combined session where the topic was introduced, (b) facilitated breakout sessions for detailed discussion, and (c) report back by breakout groups to the combined session. The first and only working session on Tuesday afternoon was centered on a proposed manifesto for the Muslim Arts Collective.

There were two more working sessions on Wednesday: one around the functions of the Arts Collective and other on the complexities of identity formation, for artists and other community members.

All three working sessions produced great ideas and lots of interest among the participants. The closing session on Thursday, the last day of the Retreat, was focused on the consolidation of these many excellent ideas and the formation of teams with responsibility for following up on and developing them. Three working committees – Committee on function and manifesto of the Arts Collective; Committee to develop a network of artists; and Committee to build the Arts Collective website – were formed with at least five participants volunteering to serve on each committee. These committees will work with one or two coordinators to develop final recommendations for the formation and, then, structure, direction and functions of the Arts Collective over the next few months. The entire process will also be facilitated by Asad Jafri.

But these Retreats have not just been a deliberative space for the exchange of ideas over the meaning of art and the role of artists in the American Muslim community, but they have also been a creative space where artists collaborate during cipher sessions that are intimate and spontaneous, and a spiritual space where artists and scholars explore the connections between creativity and spirituality. This year’s Retreat was no different.

There were cipher sessions both Tuesday and Wednesday night where poets recited, musicians played, hip hoppers and comedians freestyled, visual artists represented, and filmmakers showed trailers. That wasn’t all: filmmakers also sang, activists played tunes, rappers shared funny stories, as all manner of creativity and collaboration flowed. Such are the moments in which not only artistic but sisterly and brotherly relationships are established that sustain us through good times and bad times.

Finally, all the activities at the Retreat were punctuated by the reflections offered by the esteemed scholars present. Topics covered included the place of spirituality in art and vice versa, spirituality made relevant through art, the pluralism of Shar`iah and its relationship to haqiqah (the truth). Art is always tied, directly or indirectly, to the cause of creating positive change in our individual and collective existence.

These Retreats display and renew IMAN’s commitment to the important role that artists and artistic expressions and representations play in the lives of communities, especially the ones that IMAN serves through its organizing and services. They also serve to advance the agenda of connecting socially conscious artists to critical social issues and to each other. The Retreat last month proved to be another success in all these regards. 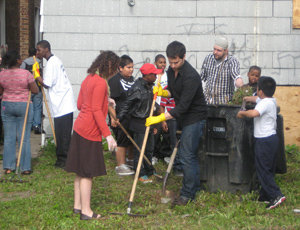 The graffitied windows in the home at 6210 S. Fairfield Avenue boast of a different kind of take-over than they did only a few short months ago. On Thursday, May 19, residents of the 6200 south block of Fairfield, elementary school officials, religious leaders, school children, neighborhood families, city and state representatives, and members from three non-profit organizations reclaimed the house on Fairfield and marked it as their own. Volunteers and residents held a barbeque on the front lawn, picked up trash around the house and down the block, began the process of building a fence and plotting a community garden in the backyard, and painted a mural on the home’s doors and windows.

Several months ago, IMAN, the Jewish Council on Urban Affairs (JCUA), and Southwest Organizing Project (SWOP) began discussing possibilities for how the three community based organizations could have an impact in the Chicago Lawn neighborhood around the issues of housing and foreclosures. Chicago Lawn was one of the areas hardest hit by foreclosures after 2007, with thousands of foreclosures making stability in the neighborhood difficult to maintain. Wanting to draw attention toward addressing the larger issue of lack of accountability from local banks, the organizations decided to target one house in the neighborhood that was a glaring representation of the type of disrepair and calamity that can befall a neglected building. 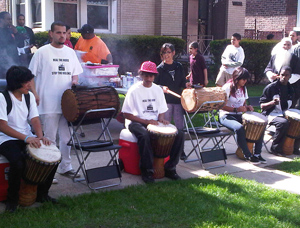 The house on Fairfield had been entered into the foreclosure process, walked away from by an owner that could no longer pay the inflated fees, resold, and, finally, abandoned. After more than a year of illicit inhabitation and shady activity, IMAN, JCUA, SWOP and community leaders and residents began making plans to reclaim the house on Fairfield. While awaiting a court decision on a possible transfer of ownership. community residents and particularly neighbors that live next to the house,decided to make a more definitive statement. The action on Fairfield was not only a celebration of collective power and neighborhood solidarity; it was also a shining representation of how a community, in the face of a grave situation, can act together to stand up for its rights and reclaim its neighborhood.

If all goes well with the case’s next court hearing on July 28, IMAN may well be able to receive permanent ownership of the building on Fairfield. Through our partnership with JCUA and SWOP, and most importantly, our collaboration with the leaders and residents on the 6200 south block of Fairfield, we hope to be able to create a positive community solution for one house ravaged by the foreclosure nightmare and to take a definitive step towards addressing the thousands of other homes, families, and communities that have been affected by this frightening reality.

IMAN’s Community Ambassadors working in the area of Arts and Culture have been trying to engage Chicago’s diverse communities through interfaith events including Community Café: Healing Planet Rock which was held at the Chicago Urban Art Society on February 25th and Healthy Eats, Conscious Beats held at Garifuna Flava Restaurant in Chicago Lawn on April 16th.

Last month, Community Ambassadors also supported the work of the Southwest Organizing Project (SWOP), of which IMAN is a member institution, by helping to map and document the status of neighborhood properties facing foreclosure. Gathering this information is part of SWOP’s community response to the current foreclosure crisis affecting many families in the neighborhood and critical to an emerging initiative of SWOP, IMAN and the Jewish Council on Urban Affairs (JCUA).

On April 30th, Community Ambassadors joined hundreds of people in a rally for immigrant rights at St. Nicholas of Tolentine Parish in West Lawn, in support of the passage of immigrant rights legislation including the Development, Relief and Education for Alien Minors (DREAM) Act in Illinois.

In June, Community Ambassadors will help organize the upcoming Community Café planned for Friday, June 17th. Mark your calendars now and sign up for updates at IMAN to get details on this and other exciting events!