IMAN has long held a meaningful bond with African American Muslim followers of the late Imam Warith Deen Mohammed. One of the ways in which the value IMAN places on this relationship is evidenced annually is through IMAN taking part in Ephraim Bahar Cultural Center’s “Walk for Moral Excellence.” This year’s parade on Saturday, July 23, 2011 likewise received IMAN’s full support. 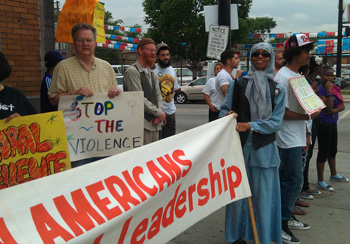 The parade stepped-off on the corner of 69th Street and Western Ave. where participants gathered brandishing banners and chanting the parade’s namesake slogan: “What do we want? Moral excellence… When do we want it? Now…” The parade commenced down Western Ave. to 71st Street, then traveled west to the rally point at Marquette Park where Bahar Center Da`wah Coordinator Darryl Williams and other local leaders addressed the crowd.

IMAN’s Executive Director, Rami Nashsashibi, was the first to speak. He began by acknowledging the religious and racial diversity of parade supporters and juxtaposed that diversity to the racism and intolerance of the Nazi group that once occupied the commercial building sitting tandem to the Bahar Center at 2525 West 71st Street. Nashashibi emphasized the power in Bahar Center’s consistent message of moral excellence and ended with the assertion that we’re no longer fighting against Nazi-like racism but against community ills.

The Bahar Center’s resident Imam, Sultan Salahuddin, addressed the crowd next. Speaking on the need for people to be in control of their own community institutions, Imam Salahuddin’s central message was to serve community. Other parade participants to speak were Rev. Ken Murray of the American Clergy Leadership Council, IMAN Board Member Rafi Peterson of CeaseFire, Tasha Smith of Mystique Ladies Social Club, Inc., and IMAN volunteer Abdul Hakim.

Following the well-received call to moral excellence, Bahar Center staff kept up the high-spirit of the afternoon by delivering free school supplies and food to participants, whose palates where especially whetted by the tasty all-chicken African sausage. Entertainment was provided by the South Shore Drill team, participants in the parade, and the Jesse White Tumblers.

This year’s “Walk for Moral Excellence” parade was truly reminiscent of Imam Mohammed’s much expounded message of service to humanity. Inspired by a similar prophetic message, IMAN’s close ties with Imam Mohammed’s community should surely remain strong given its continuing support of community institutions such as The Ephraim Bahar Cultural Center.

The Mosques Cares (Ministry of W. Deen Mohammed) will host its Annual Muslim Convention at the Tinley Park Convention Center from Sept. 1-5 of this year. If there was ever any proof needed that today IMAN and the community of Imam Mohammed remain committed to the same goals, it is that as IMAN works to build healthy communities, this year’s Convention theme will be “Al-Islam Obligates us to Build Model Communities.” 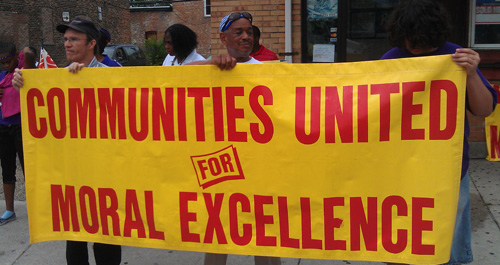 Artist of the People, Najjar Abdul-Musawwir will be traveling abroad to the world’s two largest continents from July 7th thru August 8th for a month long cultural exchange and artistic dialogue on the influence Islam has had on the African and African-American artistic process. Najjar believes these experiences will lead to the creation of a thematic body of work which will reflect an international experience.

Najjar will begin his sojourn in Morocco, North Africa where he will spend three days doing fieldwork. Here, Najjar will don the hat of archaeologist as he traverses the country looking for artifacts and at architectural structures that speak to the Moroccans Islamic faith and how this informs their artistic expression.

In Senegal, in addition to his field observations of artifacts and architecture, Najjar will lecture at the esteemed Cheikh Anta Diop University in Dakar. He will explicitly discuss the “Influence of Islam in African-American Art.” This dialogue will delve into the creative impact Islam has had on the works of Muslim and non-Muslim African-Americans.

Malaysia will conclude Najjar’s peregrinations. His Malaysian stay will include a three-week residency as a guest scholar and artist in residence at the Muzium and Galeri Tuanku Fauziah (MGTH) Universiti Sains Malaysia, where he will lecture on the “African-American Muslim Artist: Content and Survival.” During this residency, Najjar plans to look at the connection between art and science in Malaysia; how Islam and outside cultures have influenced indigenous Malaysian art.

Najjar will also debut a new body of work “Muhammad Speaks: Preserving an American Voice” this exhibition will reflect images from the 1969-1975 publications of Muhammad Speaks, founded by the late Nation of Islam leader Al Hajj Malik El Shabazz, better known as Malcolm X. These pieces were created to preserve a certain historical aspect of the African-American Islamic cultural experience in America. It is the artists hope that this exhibition will be embraced by museums and universities in other countries throughout the globe.

Najjar looks forward to his travels and if time and opportunity permits an additional appearance at the National Gallery of Art in Malaysia.

Each generation must out of relative obscurity discover its mission, fulfill it, or betray it.–Franz Fanon