The ambiance and vibe of September’s Community Café in the International House at the University of Chicago fit Chicago’s World Music Festival perfectly. The diversity of the crowd matched that of the artists, who presented soulful music from Sudan, Pakistan, and Egypt. 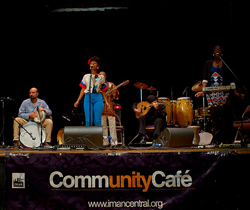 While the partnership with the World Music Festival began in 2010 as an effort to increasingly expose Chicagoans to Muslim artists from around the world, it was also an opportunity to connect the festival with more South Side venues. On the border of Woodlawn and Hype Park, IMAN would have been remiss not to invite long-time alliance partner Metropolitan Area Group for Igniting Civilization (MAGIC), to share some words. MAGIC’s Executive Director told the crowd of their mission to empower community youth to stimulate and create social change, often drawing parallels with IMAN. With this mission as the backdrop, the artists enlightened the audience with their own talents.

East-African retro-pop band Al Sarah and the Nubatones from Brooklyn kicked off the show with Al Sarah’s powerful voice and illustrated a fusion between traditional and modern Sudanese music. This set a spiritual and powerful vibe for the rest of the show through which the audience felt the artists’ aura.

IMAN Staffers and the energetic hosts for the night, Ndidi Okakpu and Alia Bilal then introduced Arooj Aftab who innovates off of classical Pakistani Sufi music. Arooj Aftab’s music left the audience mesmerized, including those who could not understand the Urdu spoken in her songs. 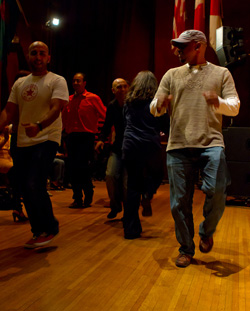 Following Arooj Aftab, Wust El-Balad from Cairo ended the night with a lively and upbeat set of music. Wust El-Balad reminded us of the significance of “bringing different people together in the World Music Festival” when they connected the audience to the Arab Spring by singing “Sout al-Horeya” which translates to “Voice of Freedom,” made famous by performances at Cairo’s Tahrir Square during the height of the demonstrations there. By the end of the overpoweringly beautiful night, the crowd was up and dancing, connecting to the artists’ energy, and cherishing their presence.

Prior to September’s Community Café, IMAN’s Director of Arts and Culture Asad Jafri predicted that “from Arooj’s Sufi-inspired ballads, to Al Sarah’s unique voice, to Wust El Balad’s fun and lively music, audiences will stay mentally, spiritually and physically engaged throughout the night.” That is exactly what happened that night.

You can see photos from the show here. Look out for the next Community Café coming up in 2012!

When IMAN introduced the Muslim Run campaign almost three years ago, it was a visionary call for a different way of doing business. As such, it was fortunate to attract the interest of everyone ranging from storeowners looking to transform their own businesses, to individuals who fervently believed in Islam’s mandate for good and fair business to foundations committed to food justice and healthy places.

With broad support and the passion and commitment of our grassroots leaders the campaign has taken special form over the last year, with an actionable plan to help small businesses throughout the Southwest Side implement alternative business models. After hosting a dinner at the end of Ramadan that brought together local storeowners for an intimate conversation on the importance of this movement, IMAN is moving Muslim Run to its next phase.

The support of the Consortium to Lower Childhood Obesity in Chicago (CLOCC) has placed IMAN in the position to take two significant actions over the next year. The first is a walkability assessment in West Englewood that will assess the safety of sidewalks, crosswalks and intersections near schools and public parks. This effort is being guided by two Muslim Run leaders, but is also being taken as an opportunity to provide community service and service learning hours to local youth in need of such work to complete their high school requirements. We hope to transform this issue into an area of advocacy, involving local politicians who have been supportive of our past efforts around safe and healthy communities.

The second action is the Corner Store Initiative that will begin in late October. An assessment of several stores already in conversation with IMAN about transforming business practices will provide a fuller sense of the state of local food providers. Four stores will ultimately be selected as ‘ideal stores,’ whose model we will seek to popularize and emulate in other businesses. These stores will become sites for increased healthy food offerings, as well as sites of education about healthy living, and one store in particular will be selected to receive special funding to supplement its fresh food offering.

Muslim Run continues to move forward in producing a viable solution to the crisis of food deserts and in promoting healthier communities on the Southwest Side.

Crowds gathered across the country on Sunday to commemorate the tenth anniversary of 9/11. These gatherings took different forms; from vigils to press conferences, days of service to roundtable discussions. IMAN has always been surrounded by a family of community organizations, faith-based institutions and residents on the Southwest Side of Chicago and was proud to spend 9/11 in the company of the people who make up these groups.

A Day of Remembrance and Solidarity was held on the steps of St. Rita Parish, the local Catholic Church. As the crowd of local residents, sprinkled with Chicagoans from across the city, swelled outside the church, Father Tony Pizzo took the microphone to welcome all in attendance. Following Father Tony, a litany of speakers explained why the diverse community in Chicago Lawn has been and continues to be a source of ethnic and multi-faith solidarity at a time of continuing polarization across the nation.

IMAN’s Executive Director Rami Nashashibi followed Father Tony with a short speech that made clear the day’s theme would be solidarity and unity. Jeff Bartow, Executive Director of the Southwest Organizing Project, spoke about anti-foreclosure and anti-violence efforts that have brought together organizers in the area, and Jane Ramsey, Executive Director of the Jewish Council on Urban Affairs, shared briefly on the long legacy of Jewish Chicagoans engaged in the struggle for justice. Along with Father Tony, faith leaders from Ephraim Bahar Cultural Center and Beth Shalom Ethiopian Hebrew Congregation all shared the universal message of love for humanity.

The event concluded with local elected leaders sharing their perspectives on the significance of this anniversary and echoing calls to use it as an opportunity to stand united as a community and as a country. State Senator Jacqui Collins and Alderwoman Tony Foulkes spoke on the uniqueness of Chicago Lawn, while County Commissioner Chuy Garcia delivered a strong message of hope in both English and Spanish. U.S. Senator Dick Durbin was in attendance and shared a moving story of coming home to Illinois after 9/11 to be greeted by an immigrant cab driver who had been verbally beaten and attacked, as his son served proudly in the U.S. Special Forces.

While serving as a time to honor and remember those who died on 9/11 and as a result of subsequent wars, the event also exemplified the unity and solidarity that runs deep throughout Chicago Lawn. In one of Chicago’s most diverse but poverty-stricken neighborhoods, the opportunity in adversity is still recognized as events that have caused strife in other places brings entire communities together here.