On weekday mornings at IMAN, you can find the brothers of the latest Green ReEntry cohort preparing diligently in both a classroom and workshop setting. Led by Matthew Ramadan, the new Green ReEntry crew is working toward Level 1 Carpentry Certification. 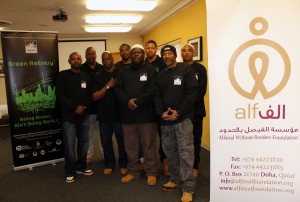 The certification greatly increases opportunities for gainful employment, including apprenticeships, upon graduation from the program.  Throughout the class the Green ReEntry crew is also learning critical financial literacy skills — from basic banking to investment strategies.

Not only is the cohort gaining the skills and knowledge needed for personal benefit, but they are also realizing the role they play as leaders in helping to transform the community. This spirit of civic engagement was also on display at the state capitol, as several Green ReEntry brothers recently pushed for bills addressing both sentence modification for the formerly incarcerated and an increase in the minimum wage.

Upon completion of the Level 1 certification, those that successfully complete the preliminary training will be selected to work on two newly acquired pro 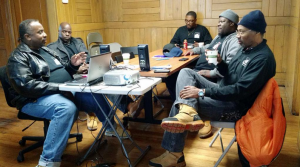 perties around IMAN’s main offices.  These sites will provide valuable training experience for the Green ReEntry crew as they continue refining their craft by working to “green retrofit” each property. IMAN is also placing and preparing two new families from our pool of Green ReEntry leaders for home acquisition in 2015.

This year’s Green ReEntry training, programming and reduced-price acquisition is made possible by your du’as, the generous support of an anonymous family foundation, Al Faisal Without Borders, Islamic Relief USA and the City of Chicago Department of Planning.

IMAN dedicates much time and energy to developing leaders, those individuals who are invested and affected by issues, and who have the ability to mobilize people around them to act constructively. Youth leaders Harun Ali Abdullah and Hussein Rahmah recently sat down to reflect on their experience at IMAN, and to discuss how their leadership abilities have developed as a result of their committed work.

Harun Abdullah: I was born and raised on the Southwest Side of Chicago, and I currently live in the Ashburn neighborhood. I attend Depaul University where I’m studying sociology.

Hussein Rahmah: I’m from the Southeast side of Chicago, but I currently live in the West Loop. I’m a student at the City Colleges, but, God willing, soon I will be transferring to UIC to study engineering.

When did you first get involved at IMAN?

HA: I got started in 2008, the year that I entered Islam. At the Friday prayer at the mosque nearest to IMAN, I met Rami and Shamar. There was a Gaza rally that day going on downtown, and so they took me along with them. They were really hospitable and friendly, and they told me all about IMAN’s work and mission. What impressed me was that, the first day I met Rami and Shamar, they were active, they were out doing things. Some community orga 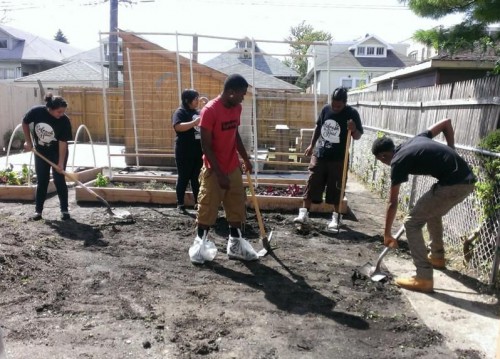 nizations talk a lot, yet there’s not much action. As soon as I met people at IMAN though, they were involved and acting. I wanted to be a part of that.

HR: I just recently got involved at IMAN through the Summer Youth Program, working on building the community garden and doing voter registration. Shamar had gotten my cousins and uncles to help out at IMAN in the past, so it was like that torch being passed on to me.

What sort of roles have you played at IMAN?

HA: Right now I’m a leader in the Youth Department, and I also serve on the Board of Directors representing the youth. I started out working with Pillars of IMAN, which was a mentorship program where young people got matched with older leaders. I’ve also been a part of the Muslim Run corner store campaign for about 3 years.

HR: I’m a part of the Youth Council. Shamar has done a great job teaching us about issues we can address and helping get us in the mindset of wanting to make real changes in our community. I’ve also worked with the Muslim Run campaign. It has been an amazing experience organizing with people who are trying to bring healthier foods to the community, because that’s something that’s extremely important. Also, doing voter registration developed new social skills in me, to where I was able to approach people I didn’t know and discuss issues with them. To do that in areas like Englewood, where residents aren’t usually approached with positivity, it shows you the power of treating people with humanity and dignity.

How has IMAN h 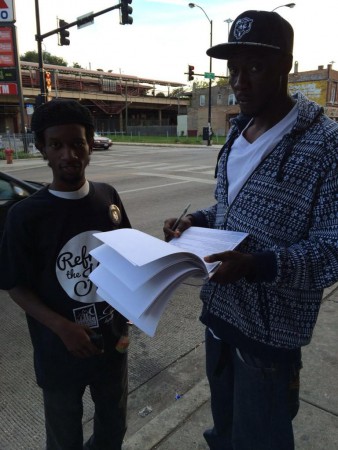 elped you become a stronger leader?

HA: Before IMAN, my perception of a leader was someone who had control over others, whether positive or negative. They gave speeches to 1000 people, or had 1000 people on MySpace. Remember this was 2008 [laughs]. IMAN helped me realize that a Leader is someone invested in an issue with the ability to mobilize people around that issue. So that led me to consider myself in a whole different light, as a Leader. It opened my eyes because, living in communities like mine, I’d become apathetic and just accepted the conditions for what they were. Being at IMAN has made me reflect on my own self-interest and see the things around me that I have the ability to fix. It’s about empowerment. I want to be one of those people, now and in the future, who mobilizes people.

HR: I never really thought about myself as a leader, but this past year I’ve done a few teaching programs and served as a leader in the classroom. As an engineering student, I always wanted to solve global crises. But this work has shown me work to be done locally, work with people on the margins of society. I never saw myself, say, approaching random people on the street asking for their support or to help them help themselves. It’s opened me up to the possibilities at the community level.

As Catholics across Chicago mourned the passing of Cardinal Francis George, a group of dedicated leaders gathered at the Catholic Theological Union for IMAN’s annual community organizing training. At a critical time for organizing work throughout the country, IMAN continues to refine a curriculum aimed at developing leaders with a real understanding of the basic concepts & principles of community organizing. 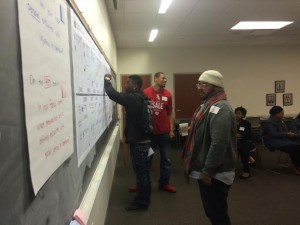 Twenty individuals arrived early Saturday morning and spent the weekend immersed in sessions that explored basic organizing themes and concepts, built meaningful relationships with one another, and examined IMAN’s unique organizing model. Powerful moments of inspiration, emotion, and connection were shared by everyone involved in the training, from new organizers to seasoned veterans. As people shared their stories and histories of struggle within their families, the group was able to draw very clear parallels between one another’s individual experiences. This is a crucial part of building a vision of a truly just world. It is in this same reflective spirit that we remember and honor Cardinal Francis George, whose commitment to justice touched the lives of millions and brought us closer to realizing the power of collective vision.

The Chicago Community Trust (CCT) is celebrating its 100th anniversary this year with an ambitious vision—to reimagine philanthropy and make Chicagoland the most philanthropic region in the nation.

IMAN is joining the celebration by participating in On the Table 2015, CCT’s yearlong campaign to celebrate everyday philanthropists. IMAN’s On the Table conversation will be held over refreshments on May 12th between 4:30pm and 6:30pm at our Youth and Arts Wellness Center at 2747 W. 63rd Street. The overarching theme of all On The Table conversations will b 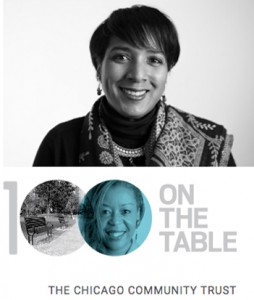 e stories of philanthropy, and how Chicagoans have given of their time, talent and treasure over the years to help our dynamic city and its many neighborhoods live up to the highest principles and values of all our sacred traditions. IMAN will be focusing on that legacy through a conversation on a very special MLK Memorial Project.

This memorial, which will be built locally at the IMAN Youth and Arts Wellness Center and unveiled in Marquette Park on August 5, 2016, commemorates the 50th anniversary of Dr. King’s march through the park in 1966, and the legacy of community action and struggle that has thrived here ever since. It will celebrate the continued work towards realizing a vision of a dignified quality of life underlying King’s quest for a Beloved Community.

The initiative will also be the launch pad for a local artisan workshop that will be a hub for artists — as well as aspiring youth and adult leaders — to hone their creative abilities, learn a new craft, and sell their artwork. This workshop would be housed in IMAN’s new Youth and Arts Wellness Center, established through the construction of the memorial to provide a vital space for community development, social entrepreneurship, and leadership development.

Your voice is a critical part of that larger conversation, and we would be more than honored if you could join us on Tuesday, May 12th. Please let us know if we can count on your presence at IMAN’s On the Table event by RSVPing here today.