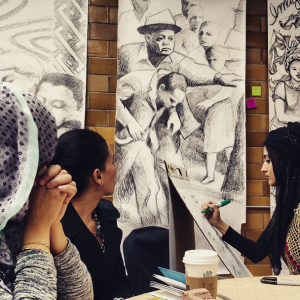 The Youth and Arts Wellness Center hosted one of the many On The Table conversations that took place across the Chicagoland area on May 12. The discussions kicked off the Chicago Community Trust’s centennial, which is a yearlong campaign celebrating everyday philanthropists — people like IMAN’s supporters, who volunteer and contribute financially in order to make a collective impact on the lives of thousands of people each year. IMAN’s conversation was contextualized by our Martin Luther King, Jr. Memorial currently under development, which commemorates Dr. King and the local grassroots activists who marched for economic justice in Marquette Park on August 5, 1966.

After light dinner and a presentation by Executive Director Dr. Rami Nashashibi, our partners from the Chicago Public Art Group unveiled draft sketches and images of the memorial. 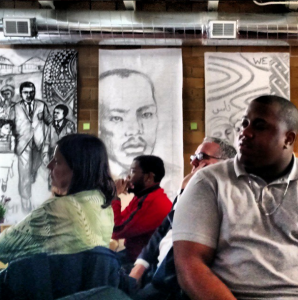 On the Table guests participated in insightful roundtable discussions around each proposed design, providing invaluable input on what emotions, memories, and inspiration should be expressed by the memorial. Staying true to IMAN’s intention of making the MLK Memorial construction entirely community-based, this feedback occurred in the very space where the memorial will be constructed.

Thank you to all our guests and fellow community leaders for attending. God willing, more events and opportunities related to the MLK Memorial project are soon to come.  We appreciate and look forward to your continued engagement and support as we strive to create Dr. King’s Beloved Community.

Residents from across the city and artists from across the world converged on the Harold Washington Cultural Center for the latest CommUNITY Café. London hip-hop duo Poetic Pilgrimage riveted the audience with a powerful blend of music and poetry, 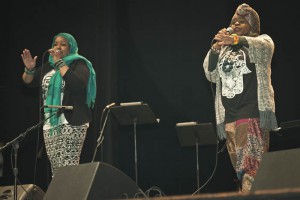 touching on topics like inner beauty and accessing the Divine in the big city. After performing, both Sukina and Muneera of Poetic Pilgrimage sat down for an exclusive IMAN interview. Here are some highlights from our conversation.

So you just wrapped up your CommUNITY Café performance; how was the experience?

Sukina: Alhamdulillah (praise be to God), the show was amazing. Everyone was so involved and the other artists were extremely talented; they had their own styles and their own vibes. It was beautiful, such a great experience.

What role does artistic expression play in your identity as a Muslim?

Muneera: Being an artist, I express how I feel. I try to live as a Muslim, have the character of the Muslim and walk in the footsteps of the Prophet (peace be upon him). There are times that I fail, but those are my intentions. Throughout the Muslim community, you have different people playing different roles: some are calling others to Islam, some are just trying to live…and that includes being an artist, something that isn’t seen as what Muslims typically do. People should do what their essence is, and what we do is make music. We communicate with hearts through our art.

I don’t think our music is saying “come to Islam,” but there are Islamic sentiments in the music because we are Muslims.  We just try to find a balance in what we do in society. Sukina works at a community center that’s Islamically driven, but doesn’t exclude the larger society. Maybe that’s the task for Muslims living in the West, not to exclude the people but to include them. At the same time though, we are not apologetic or ashamed of who we are as Muslims. 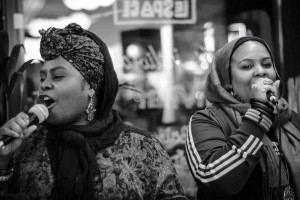 You performed a piece about the spiritual challenges (and rewards) of big city life, what are some ways art can have a positive impact on faith?

Sukina: I wrote that piece at a community space in London called Rumi’s Cave during Rabi-ul-Awwal, the month that the Prophet (peace be upon him) was born. It corresponded with January this year. It was so grim, gray and cloudy outside, but everyone was still striving for God: going to different events, mawlids, gatherings, just everything. So I just pondered, what inspires people in this city when little to nothing is really “calling you to God?” Despite that environment, we’re still here striving and seeking.

I’ve realized the virtue in the struggle in seeking God that we may go through in places like London. One of our teachers was speaking with us about Mecca and Medina. Of course those are the holiest of places, you know, it’s easy to remember Allah there. Who travels there and isn’t remembering God? But in a place like London that’s all about worldly life, you shine like a star in the spiritual darkness there when you remember Allah. He is omnipotent and closer to us than our jugular vein, whether that’s in London or on the South Side of Chicago. So we just have to learn to access Him where we happen to be, wherever that is. We didn’t sign up for an easy ride. So, when you have those moments where you’re feeling close to God, it’s beautiful because you’ve struggled for it.

Poetic Pilgrimage’s appearance at CommUNITY Café was part of their Building Bridges Artist Residency, co-sponsored by IMAN and Old Town School of Folk Music and funded by Doris Duke Foundation For Islamic Art.

Check out their ‘Hip-Hop Hijabis’ documentary to learn more about Poetic Pilgrimage as they express the world as they see it through art and rhyme.

Chicago Lawn residents filed into the inaugural Fresh Beats & Eats Farmers’ Market, as IMAN kicked off its latest effort to increase access to affordably priced, healthy foods in our community. 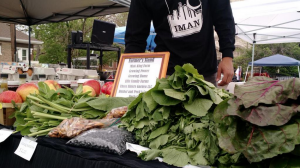 Chicago Lawn lies in the heart of a vast food desert, a community area demonstrating exceptionally low access to nutritious foods like fruits and vegetables. This can lead to disastrous public health conditions. According to recent National Minority Quality Forum research, between 45 and 55 percent of resi 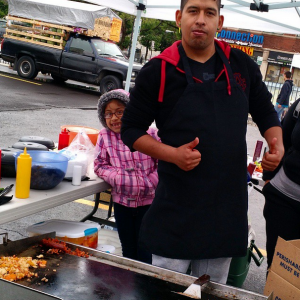 dents in one Chicago food desert zip code were suffering from stage 2 chronic kidney disease. Communities inside food deserts often lack both food and healthcare stability. This is why the IMAN Health Clinic distributes vital healthcare information during market hours, while also providing medical service inside our headquarters.

Our Fresh Beats & Eats Farmers’ Market is funded by the USDA and offers a dignified, welcoming space for residents to enjoy high-quality, healthy foods, local produce, fair trade products, artisan crafts, and live music. Said IMAN’s Farmers’ Market Administrator, Ammiel Mateen, “We’re really looking forward to this market being a weekly destination for both neighborhood residents and for people across the Chicagoland area.” Make sure to stop by Fresh Beats & Eats on Sundays from 10 am to 2 pm!