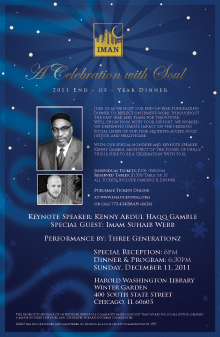 IMAN will close out 2011 with a fundraising dinner on December 11, 2011 at the Harold Washington Library Center Winter Garden honoring one of the most prolific contributors to American culture of the past half century and one of the most successful community developers of the last two decades. Kenny “Luqman Abdul-Haqq” Gamble, a Rock and Roll Hall of Fame inductee, is an icon and a legend in American pop music and an inspiration for everyone working in the fields of urban renewal and community development. He will be joined by our Special Guest Imam Suhaib Webb, Special Honorees Rabbi Robert Marx and Jane Ramsey, musical trio Three Generationz and renowned street artist El Seed. Blessed by the presence of scholars, activists and artists, the event will be, in true IMAN form, A Celebration With Soul.

Over the course of three decades Kenny Gamble became, along with partner Leon Huff, one of the most prolific and influential song writers this country has ever known. Together they penned over 3000 tracks, producing dozens of #1 R&B and Pop singles and over 150 platinum and gold records. Gamble’s work ethic and commitment to his art has earned him an induction in the National Academy of Songwriters Hall of Fame, as well as the Grammy for Lifetime Achievement. With his musical legacy solidified, in 1993 he co-founded Universal Companies with his wife Faatimah and embarked on creating a multi-faceted community development and urban renewal program that is reshaping an entire neighborhood.

The efforts of the Gamble family have helped produce Universal Business Center, a small businesses support center, Universal Institute Charter School, which opened in September, 1999 with 300 students and the Universal Community Employment Training Center skills-training and job placement service for adults. Additionally, with his Jamiyat Construction Company, Gamble has already helped build one mosque in the neighborhood and is currently planning a second. (Read more on Kenny Gamble)

Also speaking at A Celebration With soul will be Imam Suhaib Webb. Webb is a dynamic young American Muslim cleric who has spent the last several years helping build community in the Bay Area. He is an Al-Azhar trained scholar who has gained a reputation for speaking to and about the American Muslim community honestly, critically and courageously. He is one of many young leaders at the forefront of building an inclusive Muslim community that is empowered by the best aspects of American culture. (Read more on Imam Suhaib)

Lastly, IMAN will take this opportunity to recognize and honor a stalwart of the civil rights and organizing movement in Chicago, Rabbi Robert Marx. Rabbi Marx founded the Jewish Council on Urban Affairs and in doing so developed an intrinsic model for community development that has served as an inspiration for IMAN. In 1966, Rabbi Marx walked alongside Dr. Martin Luther King, Jr. through Marquette Park marching for fair access to housing throughout Chicago. Today, equitable housing access continues to be a critical issue on Chicago’s Southwest Side and is at the heart of IMAN’s partnership with JCUA in the Multifaith Housing Reclamation Campaign. Alongside Rabbi Marx, IMAN will recognize JCUA’s long-time Executive Director Jane Ramsey. (Read the letter from Rabbi Marx explaining his decision to march with Dr. King in Marquette Park on August 5, 1966)

On December 11, IMAN will bring together a group of dynamic leaders whose community service has spanned the last 50 years. The night will be complemented by the smooth jazz of Zzaje, the inspiring visual displays of eL Seed and the beautiful voices of our Native American Muslim sisters of Three Generationz. Purchase your ticket today and join us for A Celebration With Soul.