Making the best of Chicago’s famed winter season, IMAN’s 2011 End of Year Dinner: “A Celebration with Soul” was aptly held at the Harold Washington Library’s Winter Garden.  The beautiful venue as well as the décor and art contributed by IMAN staff and artist eL Seed set the stage for an event with high ambitions.   Throughout its fourteen year history, IMAN has regularly taken time to produce similar events highlighting our work, bringing our communities together, and of course raising some money for the work we do. 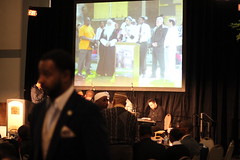 This year, we aimed to do the same with another unique IMAN twist.  Guests entered our beautifully decorated venue to the wonderful jazzy and soulful sounds of the band Zzaje that gave a nod to the catalog of music producer extraordinaire, and the keynote speaker for the night, Kenny Gamble.   Beyond the aural delights of Zzaje, guests were visually stimulated by the cutting-edge artwork of eL Seed, a Tunisian artist that seamlessly melds together Arabic calligraphy with graffiti art.  All of eL Seed’s work was created in three days exclusively for our event.  Food was catered by our good friends at Cedars of Lebanon who gave their traditional Lebanese cuisine a touch of soul, again highlighting what IMAN does so well, bringing communities together beyond the traditional barriers. The event focused on highlighting our work with the Green Reen 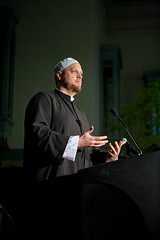 try project, Health Clinic, and Muslim Run: Campaign for Health, Wellness and Healing.  Aligning with this and our Soul theme, we presented two heavyweight speakers – Imam Suhaib Webb and Brother Kenny Gamble also known as Luqman Abdul Haqq.  Both speakers really touched the audience, with Imam Suhaib highlighting the relevance and timeliness of IMAN’s work and Brother Kenny Gamble connecting his own story and work to that of IMAN.   I believe Imam Suhaib’s closing statement said it best, “The spirit of IMAN is a spirit that is transformative and transcendent and is linked to this merciful spirit that the Prophet has taught us.  And it is extremely important that we see this legacy continue through an historical city like Chicago.” I was personally very moved by the performance of Three Generationz.  For those who still haven’t seen these IMAN favorites, the group carries on the tradition of three generations of women who fuse together Native American songs and African American soul with a Muslim sensibility.  Although it may sound confusing, the best way to experience this is by listening to their version of Tala’ al Badru ‘Alayna, a praise song for the Prophet (Peace and Blessings be upon him). The sold out event, brought together the beautiful people of our IMAN community with an energy that is rare in the middle of Chicago’s winter.  We didn’t meet our fundraising goal, but you can always help out by donating now. And for those who want a piece of the event or just love good original art, we actually have all of El Seed’s exclusive and original art work for sale.  Check out the images here and e-mail asad@imancentral.org to inquire about pricing.  You can also stop by the IMAN office to see the pieces in person.