Wayward Son – The Jordan Richter Story is the intimate story of professional skateboarder Jordan Richter and his rapid rise and disappearance from the sport of skateboarding. Jordan embraced the religion of Islam in the mid 90’s and out of what he felt was a religious obligation, quit professional competition. 15 years later he learns that skateboarding is not prohibited in Islam and making up for lost time, attempts a comeback. 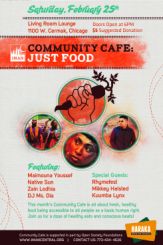 This month’s Community Café is all about fresh, healthy food being accessible to all people as a basic human right.  Join us for a dose of healthy eats and conscious beats!

IMAN’s Arts & Culture and Organizing Departments are introducing a series of arts and social change Community Workshops that will follow each Community Café.  The theme for this premiere is Just Food, just like the Community Café.

Catch Green ReEntry Manager of Casework & Outreach, Billy Moore @BMooreMADE on today's @WindyCityLIVE at 1p discussing the impact of programs like Green ReEntry and his passion to help others overcome struggles, break patterns and find a positive path in life. #OneLinkOneChain pic.twitter.com/uoPY…