IMAN continues to #FightFearBuildPower with several critical initiatives related to our Food Ecosystem work. Organizers and leaders have called on communities to “fight back with food” through our Corner Store Campaign, Fresh Beats and Eats Farmers Market and Backyard Garden. Food plays a critical role in our collective health and wellness, and IMAN is doubling down on both its support of existing food providers, as well as opening up additional outlets for residents to access nutritious goods. 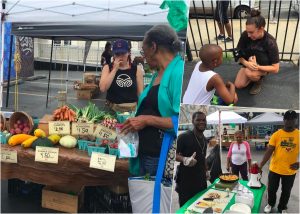 Following a successful Refresh the Hood series during Ramadan, Corner Store Campaign organizers and leaders have advanced their outreach into new stores while deepening relationships with those already in IMAN’s network. 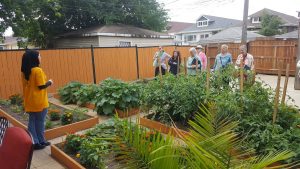 Tucked in the back of one of IMAN’s properties, the Backyard Garden is flourishing. Managed by longtime leader Olisaemeka Okakpu, the garden has served as an outdoor classroom and source of fresh produce for other Food Ecosystems leaders interested in the art of urban farming. Several harvests from the garden have been delivered to the Fresh Beats & Eats Farmers Market to be distributed as samples. A local chef also conducted a live cooking demonstration with vegetables grown in the Backyard Garden, showing market-goers that they too can own their food “from seed to plate”.

There are many ways to support IMAN’s Food Ecosystems work, like purchasing local foods from Fresh Beats & Eats Farmers Market, or engaging one of our partner corner stores. To get involved as an organizer or leader, contact Corner Store Campaign Manager Sara Hamdan or Food Ecosystems Coordinator Eric Rodriguez.