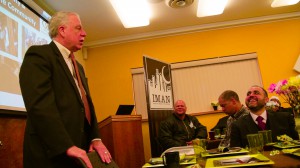 Everyone from the Fairfield Elementary School marching band to the City’s Department of Planning Commissioner, Andy Mooney, joined together on Monday, April 28, with IMAN’s Green ReEntry crew, and representatives from Al Faisal Without Borders and the Qatari Embassy in Washington, DC to celebrate in a momentous and highly symbolic occasion. The formal ribbon cutting ceremony for IMAN Green ReEntry’s second home, at 6210 S. Fairfield, acknowledged the tremendous efforts of a very unconventional project that from the very beginning went way beyond the confines of a typical bricks and mortar project.

“I’ve been involved with development for close to three decades, but I think this is the first time I’ve seen something like this,” said Andy Mooney in his comments referring to the very unique set of local and global partners who came together under IMAN’s leadership over the last several years to forge a model that IMAN is hoping to take to scale over the next three to five years.

“We would never have been able to acquire this home if community partners and organizers from the Jewish Council on Urban Affairs, Southwest Organizing Project and others across the city didn’t come together three years ago through the Multifaith Housing Reclamation Campaign to help us mobilize with our local leaders around this home,” said IMAN’s Alia Bilal who served as emcee that morning. 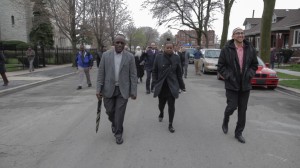 “This was much more than just a job training program; this gave us our humanity back,” said Charles Yacoub Farmer, a lead apprentice on the Green ReEntry Crew.  Over the next week, the Green ReEntry crew will put finishing touches on the home and participate in a formal graduation on Wednesday, May 14, at 4 PM.  Two new families led by formerly incarcerated IMAN leaders from the community will move into the new building by July 1.  The bottom floor will be used as a community space, along with the community garden that will allow young people and neighbors on the block with the opportunity to grow their own fruits and vegetables.

View more photos from the even here.