Ms. Freya Powell had driven past our IMAN Atlanta office several times before she decided to stop in. She had learned about IMAN through another community partner and two months ago, finally made the decision to attend a Grassroots Power Hour session—our weekly community organizing forum that connects people in order to build power around important issues. What Ms. Freya experienced floored her. Never before, she told me, had she been in a space that affirmed so much of her humanity—that brought older generations together with young leaders, that connected returning citizens with the children of immigrants, that incorporated the arts and self-care practices as crucial components of working to uplift and transform her community. 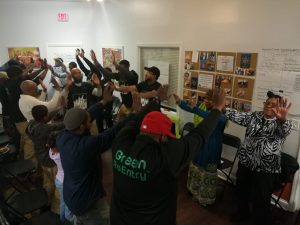 And meeting Ms. Freya validates everything I have always known and loved about this organization. I have the privilege of being the only IMAN Atlanta staff member who has had the experience of working at both the Chicago and Atlanta sites. Over the last three years, I have witnessed IMAN’s holistic model take root and flourish organically in my home state of Georgia and can attest to IMAN’s ability to create real meaningful change—helping to pass important legislation around prisoner rights; training over 65 leaders in our signature Community Organizing curriculum; inspiring the hearts of over 1,000 people through powerful artistic expression at Community Cafés; rekindling connections to the earth through urban agriculture and healthy eating workshops; graduating three Green ReEntry cohorts; and now, on the verge of completing renovation of a 10-unit apartment complex—the most expansive Green ReEntry project IMAN has embarked on in its over 21 year history.

Ms. Freya has been inviting everyone she knows to join IMAN’s efforts and especially loves that IMAN is a space that she feels connects her to her own faith, while forming a solid and meaningful link to people of other faiths doing life-changing work in her community. In Ms. Freya’s words, “I found peace here at IMAN – it woke me up.”

Join me and Ms. Freya in supporting IMAN’s One Link, One Chain: 2019 Ramadan Drive with a generous, zakat-eligible, tax-deductible donation. Help us continue to form links like Ms. Freya in Chicago, Atlanta, and beyond.