IMAN Arts and Culture is excited to be a part, again, of the yearly Chicago World Music Festival held by the City of Chicago’s Department of Cultural Affairs.  We are sponsoring a performance by Nawal, from the Comoros Islands, and Slowbots, from Chicago, on Saturday, September 21 at the Old Town School of Folk Music. 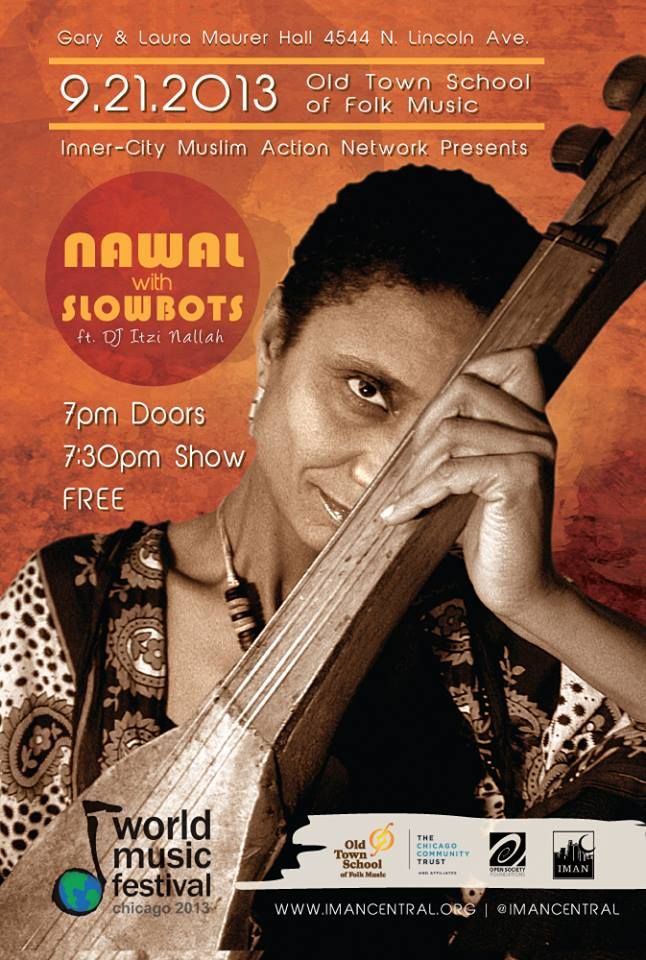 Over the last few years, IMAN Arts and Culture has partnered with some of the most iconic local and national arts organizations and venues to bring contemporary and traditional Muslim artists and art forms to local and national audiences.  The Old Town School of Folk Music has been one such partner organization where IMAN has brought this fusion of the global and the local in arts over the last few years, while the City’s Department of Cultural Affairs has been another one.

As far back as 2009, IMAN partnered with the Old Town School of Folk Music to host a special event with Faiz Ali Faiz, a world-renowned qawwali musician from Pakistan, and with the Department of Cultural Affairs to bring the popular Iraqi oud musician Rahim Al-Hajj to the annual Chicago World Music Festival.

Since then, both these and other partnerships have continued to create a local tradition of hosting shows and artists which present and explore contemporary and traditional Muslim artists and arts in their full diversity and breadth.  For example, earlier this year IMAN Arts and Culture presented the Chicago debut of Hamid Al-Saadi, the foremost authority of Iraqi Maqam, and Vieux Farka Touré, one of Africa’s most exciting and inspirational new artistic voices, and the son of one of the continent’s most celebrated musical gurus, the late Ali Farka Touré, both at the Old Town School of Folk Music.

This year’s Chicago World Music Festival concert at the Old Town School of Folk Music with Nawal and Slowbots will be another opportunity to bring a unique pairing of global-local art to a Chicagoland audience.  It promises to be a memorable night of music, and we hope to see you there!