In April, we publicly debuted IMAN-Atlanta at a venue within walking distance of one the most hard-hit urban neighborhoods in America, referred to locally as “Tha Bluff.” Several years ago this community received national notoriety through an independent reality-drama film titled “Snow on tha Bluff.” Yet, beyond that brief moment of media attention, Tha Bluff resembles so many inner-city urban neighborhoods across the US that continue to languish in disinvestment. 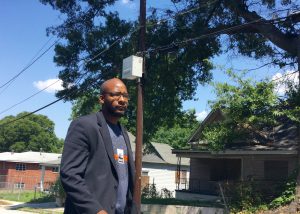 “The fact that neighborhoods such as ‘Tha Bluff’ even exist in the United States at all in 2016 would shock many Americans who, because of ignorance or convenience, have never confronted this reality,” said Imam Mansoor Sabree, IMAN’s full-time Atlanta Regional Organizing Director and former Imam of the Atlanta Masjid. “The prayer and hope is that the growth of IMAN in Atlanta can make a difference through our organizing and programmatic initiatives in the lives of families trapped in this reality.”

During these final, precious days of Ramadan, we are asking you to help us reach and exceed our 2016 Ramadan Drive goal by making your zakat-eligible, tax-deductible donation today.