On March 22, IMAN joined fellow members of the Grassroots Alliance for Police Accountability (GAPA) for a press conference at City Hall announcing the release of their Citywide Community Conversations report. Veteran organizers from across Chicago gave testimonials stressing the urgency of this police accountability campaign, and called on city leadership to act now to support community-driven changes to police protocol. 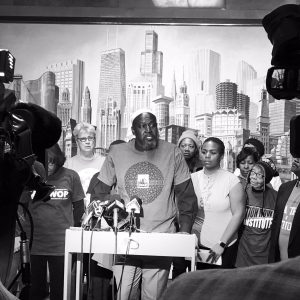 Green ReEntry leader Mustafa Hawthorne spoke powerfully about his experience with the Chicago Police Department and the Illinois correctional system, a story which traces its roots to the era of the infamous commander Jon Burge. Along with other local organizers, the press conference shed light on the devastating harm that police misconduct can have on the individual, family and community levels.

The GAPA report encapsulates months of in-depth focus groups and “Community Conversations” hosted at various sites across Chicago. While stories of frustration and anger were common, the heart of the report amplifies residents’ calls to “fundamentally rethink the role of the police officer, reimagine the way police officers interact and engage with residents, and restructure the way the police department is governed in order to ensure that it embraces the values and priorities of the people it serves.”

IMAN’s efforts with GAPA will continue, as community voices are lifted up and city leadership is engaged in pursuit of lasting change to the status quo. Police accountability is an issue affecting many IMAN leaders, for whom GAPA serves as a promising vehicle through which to counteract the over-criminalization of Black and Brown communities. If you are interested in joining this campaign, contact Organizing Director Shamar Hemphill at shamar@imancentral.org.