After a summer full of delicious organic fruits and veggies, bands from North Africa to South Chicago and all-ages excitement, the Fresh Beats & Eats Farmers’ Market has ended its inaugural season. 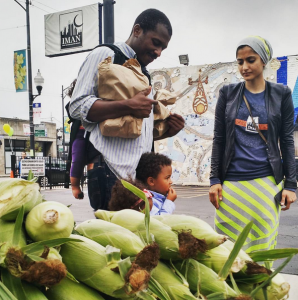 To commemorate the conclusion of the market, as well as the Eid al-Adha holiday, IMAN hosted a special ‘Fresh Beats & Eats Finale’ event on Sept. 27th that was attended by over 150 neighbors and supporters. In addition to an expansive offering of locally grown produce via IMAN and the Growing Power ‘Fresh Moves’ bus, guests also enjoyed complimentary lunch. The soulful sounds of Zeshan Bagewadi and his band competed with the laughs of children playing in the bounce house and on the inflatable slide. To conclude the event, a panel of local faith leaders who’ve lent years of support to IMAN convened onstage to reflect on the themes of sacrifice and family that Eid al-Adha so powerfully reminds us of.

The inaugural year of Fresh Beats & Eats featured many successes. Charles Muhammad, a regular market-goer, said that he’d particularly miss the “camaraderie between the entire community when they were inside that space. This is a Sunday gathering that just feels nice, it feels right.” Muhammad also believes that Fresh Beats & Eats is a prime chance to encourage nutrition and wellness in the inner-city, saying, “To eat from the earth, and reconnect with a culture of getting back to the basics of cooking and eating healthfully. We’ve lost a lot of that during these days, and the market is really convenient to help encourage those things.” 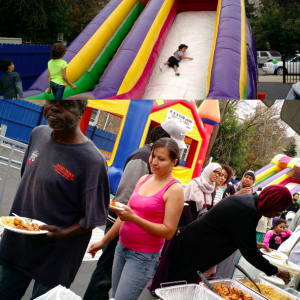 One impactful way that Fresh Beats & Eats promoted community health was through its “Double Dollar” program, whereby guests shopping with an Illinois LINK card would receive a matching gift card amount to spend at the market on all purchases up to $20.

God willing, the farmers’ market will return in the spring with even more food and fun options available to South Side residents. Thank you to the amazing team of staff, interns and dedicated volunteers who helped make the inaugural year of Fresh Beats & Eats not only possible, but a huge success!