I heard Marc Lamont Hill speak these words in a powerful moment last December while emceeing IMAN’s Annual Fundraising Dinner. His observations on our work struck me as resonant with rich Malcolm-esqe insights. Marc himself was delivering these words only hours after CNN publicly parted with him because some chose to manipulate his words about the plight of the Palestinian people at the United Nations. Finally, to add to the richness of that moment, Marc delivered his speech for IMAN in a room at the South Shore Cultural Center named after Paul Robeson—a celebrated and persecuted black activist and intellectual—just minutes after Maryum Ali—the daughter of Muhammad Ali—delivered her powerful testimony about the intersectionality of IMAN’s work and her fathers legacy. 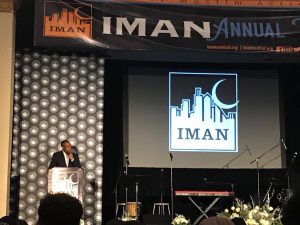 Over the weekend, people across the country reflected on Malcolm’s ongoing legacy on what would’ve been his 94th birthday. I saw beautiful posts on social media and heard stirring reflections. Yet, beyond all the great meditations on his legacy there is no American Muslim organization that I know of that has been able to translate Malcolm‘s unapologetic commitment to improving the lives, conditions and opportunities of our communities in urban America like IMAN. It’s why I’ve dedicated this portion of my life to leading IMAN’s work in Atlanta, which over the weekend broke fast with the community at a Green ReEntry development project built by the type of brothers Malcolm would’ve had his arms around today, celebrating them the way we celebrate them at IMAN.

As we enter the last two weeks of Ramadan, please contribute generously to our One Link, One Chain: 2019 Ramadan Drive. Your support is a critical link in this chain and ensures that we can continue to unapologetically place our arms around those so often left out of the conversation, and celebrate them in a way that lifts up the possibility and promise of what we can and will, God willing, accomplish together through this work.