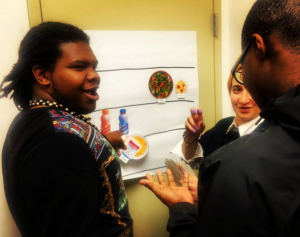 As the springtime weather warms up, IMAN’s Muslim Run Corner Store Campaign continues to serve as a vehicle for organizers and store owners to blossom. Over the past few weeks, Muslim Run has picked up new marketing techniques from an experienced partner organization, helped encourage fellow community members to make healthier beverage choices, and was featured in local media. 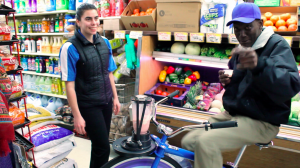 Morgan Mini Mart also hosted the debut of a new nutrition workshop series, led by Muslim Run and UIC’s Chicago Partnership for Health Promotion. Residents blended their own free fruit smoothies on a special “smoothie bike”, and were engaged about their beverage habits and opinion on nutrition.

Finally, organizers Shamar Hemphill and Sara Hamdan were interviewed by a journalist from the Chicago Reporter, and will be a central part of an upcoming feature article on cutting-edge food justice work on Chicago’s South Side. With candidates currently being interviewed for the chance to operate our upcoming Healthy Marketplace, IMAN’s health and wellness efforts are truly firing on all cylinders.