IMAN Green ReEntry Residence Coordinator Michael Nasir Blackwell works diligently to maintain a peaceful, safe environment for brothers to learn, earn and grow spiritually after their release from prison. He was shocked to find out that a parole technicality currently on the books in Illinois could put him at risk of being sent back to prison. 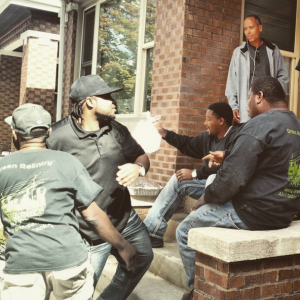 Nasir is currently serving a 3-year mandatory supervised release and, being on parole, he says that he legally “cannot associate with another ex-offender on parole without prior written permission from his parole agent.” Many other formerly incarcerated individuals who are fully committed to empowering themselves and their communities are suffering under this restrictive statute. For these brothers and sisters, returning to the streets to effect positive change could easily mean a return to prison.

Blackwell, other IMAN organizers and community activists, with their sights set on eliminating this technicality, have drafted SB 2282, or the Removing Invisible Bars Act. Officially read at the State Capitol in late-January, the Removing Invisible Bars Act proposes to protect individuals on parole from being rearrested for “associating with others on parole” while they are engaged in community organizing efforts. This bill stands to save our cash-strapped state millions of dollars by reducing the high numbers of parolees who are arrested due to technical violations; nearly 8,300 people were returned to prison in 2014 based on technicalities at a cost of over $185 million.

Organizers, leaders and allies will be working diligently to educate legislators about the bill in hopes of getting it passed this spring. Keep our efforts in your prayers and stay tuned for ways you can get involved with the Removing Invisible Bars Act.