As IMAN prepares for this weekend’s annual United Congress of Community and Religious Organizations (UCCRO) convention, we reflect on the power of this decade-old alliance that was established to unite communities of color, organize and advocate for a grassroots human rights agenda. From the beginning, UCCRO sought to connect the stories of collective experiences, and from the beginning the stories of our First Nations brothers and sisters played a critical role in that effort. 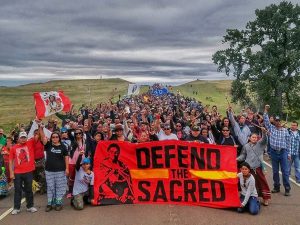 Earlier this year, LaDonna Brave Bull Allard and other members of the Standing Rock Sioux Tribe began organizing to halt the construction of the Dakota Access Pipeline (DAPL), which would pump 570,000 barrels of crude oil per day from North Dakota all the way to Illinois. If built, DAPL would cut through land held sacred by the Standing Rock Sioux and risk contaminating the drinking water of the tribe and other communities along the pipeline. The #NoDAPL movement has inspired solidarity in the hearts of millions across the world who support the Standing Rock Sioux as they safeguard their ancestral land.

IMAN stands in solidarity with the Standing Rock Sioux and all communities asserting themselves through organizing and alliance-building to address systemic racial and environmental injustices.

Today, on Indigenous Peoples Day, we pause to reflect and honor the histories of native communities across North America. As we continue to support the #NoDAPL movement, we also encourage you to support in the following ways: