It’s been a really busy March for IMAN’s Community Ambassadors (CAs). Much has transpired since their collective efforts packed the Chicago Urban Art Society for IMAN’s February Community Café. Nevertheless, March jumped off with a trip to Springfield for the Illinois Muslim Action Day. CAs joined young Muslims from around Illinois for a rally in the rotunda of the State Capitol building where Muslim leaders energized the crowd with their inspirational words. Local politicians expressed their support for Muslim Illinoisans, and CAs along with IMAN staff met with local representatives. They also presented Governor Quinn’s office with a petition of almost 400 signatures in support of allocating Fresh Food Funding to neighborhood stores in hopes of increasing the health and wellness of residents and supporting small businesses in local communities. 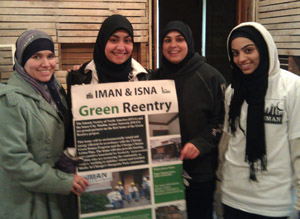 CAs even performed at and supported Café Finjan, an interfaith concert that brought together Muslims, Jews and others in a safe space for artistic performances and reflective dialogue. The show’s intermission offered the diverse crowd a chance to break into small groups and discuss the event’s theme, “Chicago Crossroads,” in relation to their specific life challenges. CAs were happy to give a huge round of applause to fellow ambassadors Ainee Fatima and Emaan Nafees as they captivated the crowd with their spoken word.

CAs also got moving with planning efforts for their April 16th health & wellness event, which they’ve titled “Healthy Eats Conscious Beats.” This event will be held at Garifuna Flava Restaurant, a local eatery down the block from IMAN’s office, as CAs are committed to supporting the local community and businesses. They plan to use this event to broadcast the importance of health and wellness to the Chicago Lawn neighborhood.

It was also a real treat for CAs to join the brothers from the Green Reentry Project in their efforts to beautify several blocks along South Washtenaw Street. Together, we left a positive imprint on the community, as they scoured blocks picking up trash and debris marking the start of Green Reentry’s larger outreach to the community, which will soon include home weatherization. It’s been a busy March for CAs, but don’t fret there will be much more coming in April.

One Response to One Chicago, One Nation: Community Ambassadors Becoming Leaders