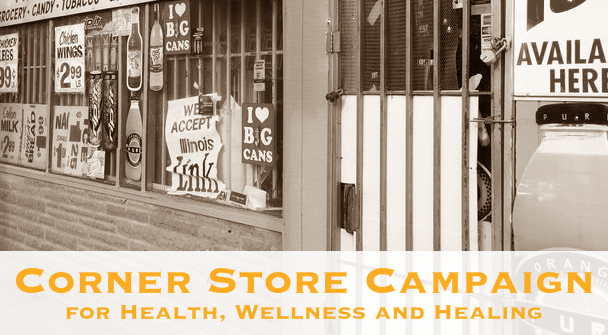 The Corner Store Campaign addresses the long history of injurious business practices, ingrained racial tensions, and unhealthy food options that typifies many inner-city corner stores. Since its launch, the Campaign has focused on four critical goals:

Thriving small businesses are an alternative to the current trend of ‘big box’ and ‘discount stores’ returning to the very communities they previously abandoned. 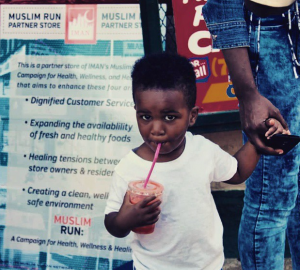 We seek innovative policy solutions to help small businesses compete in this changing landscape, including but not limited to: city ordinances, grants and micro-loans for local corner stores to stock fresh foods.

We understand that changing store owner practices is futile without altering residents’ desires.

Accordingly, the Corner Store Campaign’s curriculum will reintroduce ideas of healthy eating and living through principles, programs and media.

‘Food and liquor’ stores are commonly found in majority-Black, low-income neighborhoods. These stores are often owned by Arab immigrants, many of them Muslim.

Very real racial tensions exist between store owners and residents. As a Muslim organization located in a low-income neighborhood, IMAN understands the marginalization experienced on both sides.

We believe that the work toward a solution to the food access crisis includes healing the relationships between Arab store owners and Black residents.

Below is a side by side comparison of a 12 block by 4 block radius in the West Englewood and Lakeview neighborhoods of Chicago. These maps reflect the abandoned buildings, vacant lots, corner stores, and other food retail establishments within each radius. While West Englewood and Lakeview are only 15 miles apart from each other, in terms of access to food and resources for development, there is a stark contrast between the two neighborhoods. 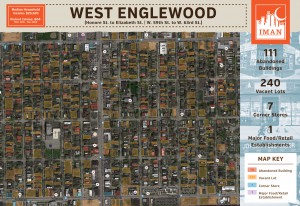 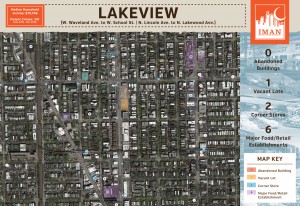 Media Solidarity at the Liquor Store? IMAN's Muslim Run was featured in the national magazine on race and politics, Colorlines, produced by the Applied Research Center. The article explores immigrant-owned and run businesses in Black Neighborhoods. Download it here Muslim liquor store owners get help with moral dilemma A Muslim group is offering a grant to help store owners sell fresh foods instead of liquor, pork and other Islam-proscribed merchandise. Read it here Fighting the Food Justice Fight, One Veggie at a Time America's inner cities are virtual food deserts, with nary a grocery store to be found. How one Chicago coalition is trying to change all that.