IMAN is at the forefront of two impactful pieces of legislation aimed at reforming both police accountability measures in Chicago and criminal justice policy across Illinois. Organizers and leaders have continued to push residents, partner organizations and legislators to take decisive action in each of these campaigns, which seek to create safer, more dignified communities throughout the state and enact a model that may be applied in other regions. 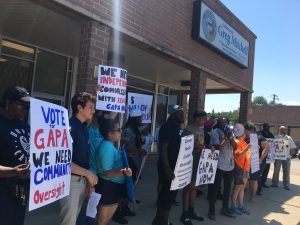 As a key member organization within the Grassroots Alliance for Police Accountability (GAPA), IMAN has invested over two years into the citywide effort to establish a more balanced, transparent relationship between communities and Chicago police. GAPA organizers have proposed a groundbreaking ordinance which promises real power to civilians in matters of police conduct. Several aldermen and other city officials have voiced their support for the proposal, reflecting the widespread desire of those Chicago residents for police accountability. However, several key alderman have yet to commit, leading many GAPA members to organize an agitational bus tour during which they visited aldermanic offices across the city to demand support.

The second piece of legislation in which IMAN organizers have been invested this year is SB 3489, the Path to Restoration Bill. After passing through the Illinois House and Senate, the bill remains on Governor Bruce Rauner’s desk, waiting to be signed into law. This legislation, drafted by IMAN organizers, would secure valuable rights for returning citizens across the state hoping to positively contribute to their communities. Most notably, individuals listed on Illinois’ cumbersome Child Murder and Violent Youth Offender Registry–many of whom were themselves young people when convicted of their crimes–would be able to amend inaccurate information about themselves.

If you are interested in advocating for criminal justice reform, or participating in community conversations with other leaders, legislators, residents and others directly impacted by violent crimes, contact Organizer Nasir Blackwell, nasir@imancentral.org and Staff Attorney Aaron Siebert-Llera, siebert-llera@imancentral.org.