Along with Cook County Commissioner Jesus ‘Chuy’ García, County Board President Toni Preckwinkle made her first ever visit to IMAN on Thursday, October 15th. Preckwinkle and her staff were engaged by our leaders on IMAN’s commitment to improved public safety in the Chicago Lawn community, and pushed to increase her office’s support for that effort. 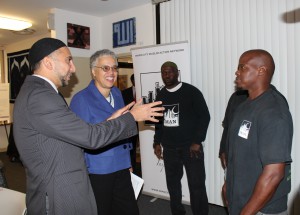 After touring the IMAN Health Clinic and Youth & Arts Wellness Center, Preckwinkle met with the current Green ReEntry cohort. That same morning, the brothers were working through the final stages at the latest renovation project on South Washtenaw Avenue, and detailed for Preckwinkle the ways that their work and presence helps stabilize this community.

García, Preckwinkle, and IMAN staff and leaders then sat down over a light breakfast to further discuss the measurable local impact of IMAN’s work, pathways to program expansion, and the necessity of increased support for initiatives like Green ReEntry by Cook County leadership. Nasir Blackwell, a sharp legal mind and the new manager of the original Green ReEntry home on Washtenaw, introduced the plans for the IMAN Legal Clinic effort he will lead in 2016. Blackwell spoke passionately about the barriers that incarcerated individuals face both inside and when released, citing the need for legislation that is more conducive to helping the formerly imprisoned reintegrate smoothly into their communities. 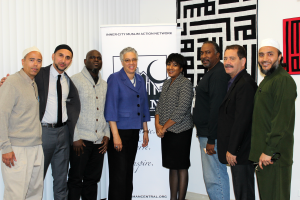 Talks wrapped up with references to the new Level 1 Trauma Center scheduled for construction at nearby Holy Cross Hospital. While the clear need for high-quality healthcare facilities on the South and Southwest Sides was acknowledged, many variables remain unknown. IMAN thanks the offices of County Board President Preckwinkle and County Commissioner García for their visit.