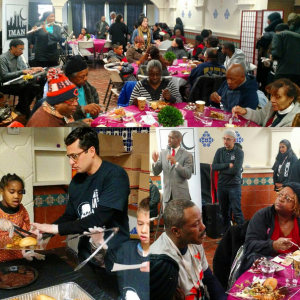 Volunteers of all ages spent the afternoon serving catered meals to community residents while 16th Ward Alderwoman Toni Foulkes and 17th Ward Alderman David Moore shared reflections on the legacy of Dr. King’s work in Chicago. After enjoying good food and great company, guests were given a special tour of the site where the historic Martin Luther King Jr. Living Memorial is being constructed.

Several of Chicago’s major media outlets—including CBS, NBC, ABC and the Chicago Tribune—also visited the Memorial workspace. Reporters interviewed IMAN staff and leaders who are playing pivotal roles in the development of the Memorial, as well as artists from the Chicago Public Art Group while they were working to refine the Memorial’s design. 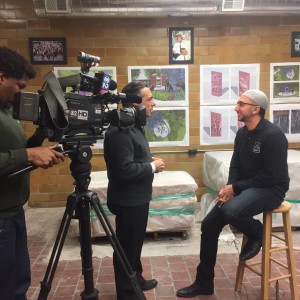 The MLK Living Memorial is a monumental, collaborative effort towards enshrining a crucial moment in this city’s history: Dr. King’s participation in the Chicago Fair Housing Movement. While recognizing the historic importance of that campaign—which led to the historic 1966 Marquette Park March—the project will also energize and inspire communities across the city and country to remember King’s message and continue to work for genuine social justice.

The Memorial will be unveiled as a part of IMAN’s special Takin’ It to the Streets Festival & Summit on August 6, 2016. For more information about the Martin Luther King, Jr. Living Memorial, stay connected to the official project website: www.mlkmemorialchicago.org