“Many Americans seem to form their impression of Islam solely from terrorist acts abroad. But if they spoke to the men at Green ReEntry, they’d see an opposite image: of the faith as a force leading away from violence.”

We have all spent the last week reeling after one of the worst mass shootings in our recent history. The unfortunate but unsurprising rush to connect this horrific act of terrorism with the larger American Muslim community dominated the news cycle. 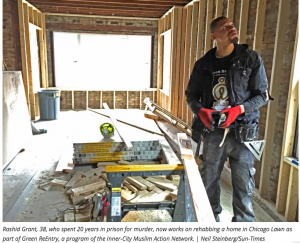 Many of our Muslim organizations and leaders (IMAN included) naturally responded with unequivocal condemnations of the shooting and heartfelt condolences for the victims and their families. Yet, it often feels that such statements fall on deaf ears. The fact is that most of us would prefer to be shown rather than told what the “real” expression of our faith looks like in action.

For me, that was the power in the Steinberg quote listed above. Nothing speaks more to the redemptive, life-giving and violence-reducing power of our faith than programs like IMAN’s Green ReEntry. I wish I had the ability to show more of my friends, family and colleagues across the country the power of IMAN’s work in some of our hardest-hit neighborhoods in Chicago.

For now I’m asking you to help us deepen and expand our impact by making your zakat-eligible, tax-deductible donation to our Ramadan Drive and help us reach our $500,000 goal before Eid. Together we can make this work speak to all those in need of seeing a real model of our community’s commitment to stemming the tide of violence, poverty and injustice in our inner cities.