IMAN began hosting its Drumming and Storytelling class at the beginning of April, the first of three six-week sessions being offered this year. Infused with the knowledge and experience of Sekou Conde, founding member of the Seneke Ensemble and a seasoned drummer of over 35 years, students are learning the musical art of percussion as well as coming to understand the history and culture from which the art originates. Like many of IMAN’s skill-building opportunities for youth, there is a critical knowledge component to this class that makes it more than a simple lesson in drumming. 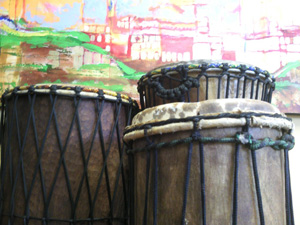 Sekou shares that opportunities for youth to engage in the arts are “crucial to the development of young minds and encourages discipline, wisdom and unity of people.” His point resonates with IMAN’s continuous efforts to use art as a tool to bring together people of different backgrounds, ultimately with the intention of inspiring social change. This latest effort to provide a safe and healthy space for young people to develop as future leaders is beginning with a diverse group of 15 students, whose racial, religious and geographic make-up very much resemble IMAN’s broader service and organizing base.

Sekou says that while his classes often draw a diverse representation, “IMAN is a great tool for bringing together different ethnicities to promote harmony and unity.” From Drumming and Storytelling to Muslim Run, IMAN is making a concerted effort to increase cultural awareness and racial healing among the communities it engages. While there is no single solution to the myriad of issues that might stunt the development of a healthy and stable community, providing multiple outlets to address health, wellness and healing is an organization-wide goal at IMAN. Programs that cater to youth and allow them to broaden their ability to positively engage their community are yet another way of providing them a clear path of engagement with the rest of IMAN’s work and ensuring that our efforts remain intergenerational.