“This conference has taught me a lot about nutrition and how food plays a large role in my development overall ,and I want to become more active in the Muslim Run Campaign,” says Miriam, an IMAN youth leader and participant in IMAN’s current youth literacy program.  Over the past two months, IMAN and its youth leaders have been deeply engaged in conversations around food justice with a host of other organizations around the city.   Miriam was speaking after one of the two SHIFT (Shaping our Health by Influencing Food Trends) conferences held recently by the Department of Kinesiology and Nutrition at the University of Illinois at Chicago.  These youth advocacy conferences deal with the direct impact of large corporations that market unhealthy foods in low-income communities, especially targeting the youth in these communities. 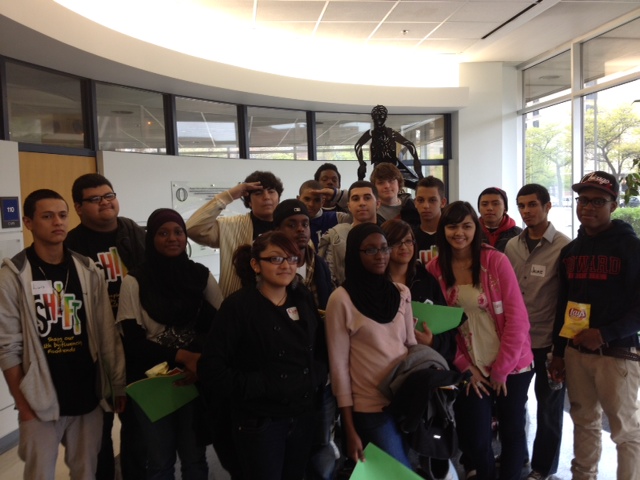 SHIFT is a national campaign and includes young people from Philadelphia, PA, Baltimore, MD, Birmingham, AL and Durham, NC.  Its aim is to educate youth about unequal food marketing practices that disproportionately target them with unhealthy foods and beverages, and equip them with the necessary tools to begin a counter-marketing campaign that SHIFTs the demand for unhealthy foods and beverages in their community.  This level of training and development is critical for IMAN’s Muslim Run Campaign and our youth leaders to better understand the importance of shaping food trends in corner stores.

The SHIFT conference had hip hop performances, spoken word, African drummers and informative speakers.  It ended with youth breaking into focus groups and training workshops to get more educated about food trends in their communities and the affects these have on their overall physical and intellectual development.

Miriam now sits on the steering committee for IMAN’s Muslim Run: A Campaign for Health, Wellness and Healing.  She also went down to the State Capitol in Springfield this past March for the Illinois Muslim Action Day to deliver Muslim Run campaign material to legislatures.  With childhood obesity still on the rise in the US, IMAN believes that it is critical to both educate and enable young people to live healthier life-styles.

Our education track leaders, youth and adults, are gearing up for summer activities around two of our partner corner stores in the month of Ramadan (third week of July to third week of August).  Based on and inspired by what the youth learned from these conferences, they will implement their knowledge on the ground in their communities over a period of four weeks in the summer.   It will allow IMAN to begin shifting the paradigm around food choices, and help everyone understand why we want to become healthier and take back our communities.