Since 2001, every Thanksgiving Day has brought with it the Annual Chicago Muslim Turkey Drive, and this year was no different.  With this annual drive, Muslims of Chicagoland come together to help their neighbors in need on the South Side celebrate with their families on Thanksgiving Day.  As in years past, IMAN collaborated with the Webb Foundation and Sabeel Food Pantry to purchase and distribute turkeys in the Marquette Park and Jackson Park neighborhoods.   The Drive has grown every year, and a total of 845 turkeys were distributed at three different locations on the South Side this year, making this the most successful drive yet. 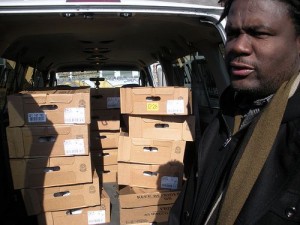 The Annual Turkey Drive is a grassroots effort, led by American Muslims for Activism and Learning (AMAL), and is coordinated by an all-volunteer team with the help and sponsorship of community partners.  Once again, the beneficiaries of the turkey drive were families in need in Chicago’s Jackson Park and Marquette Park neighborhoods.  In Jackson Park, the recipients were families of children attending Emmett Till Math and Science Academy, while in Marquette Park the recipients were families in need in IMAN’s neighborhood.

The number of turkeys distributed this year by IMAN was boosted by a generous first-time donation of 60 turkeys by Midamar Corporation, based in Iowa.  Midamar has been a sponsor and supporter of IMAN events, such as Takin’ It to the Streets, in the past.  We hope that such partnerships will continue and grow as the American Muslim community’s efforts to live the best of our faith are institutionalized.

As IMAN attempts to bring systemic change in urban communities with services and organizing aimed at alleviating entrenched and complicated problems such as violence, foreclosures, lack of jobs, and failing schools, we believe it is still meaningful to bring some holiday hope and caring to our neighborhoods.

This Is Why We Are Dying