IMAN, The Warriors & A Deep Bench

When I left Chicago six years ago and moved to Oakland to serve as General Counsel and Vice President for the Golden State Warriors, I never imagined that we’d win three NBA championships in such a short amount of time.

Beyond good fortune and some extraordinary players, that success is a testament to our team’s deep bench – an effort that I’ve been blessed to be a part of over the years. “Strength in Numbers” is more than just our slogan, it is a mindset that is central to our success both on and off the court. 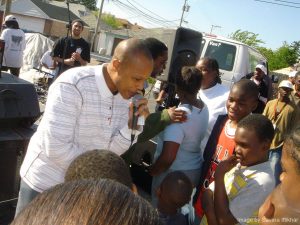 When I first got involved with IMAN as a hip-hop artist in 2003, few would have predicted that 15 years later it would grow into one of the most dynamic American-Muslim led grassroots organizations of its kind. Cultivating a “deep bench” of up and coming leaders is among the most impressive, and indeed necessary, accomplishments of the IMAN model over the last 20 years. With a chapter in Atlanta and collaborations across the country, IMAN is now celebrated as a nationally relevant model – one that many of us have helped to build and one whose accomplishments we should all take pride in.

If you’ve been reading the powerful emails from IMAN over Ramadan and keeping up with the ongoing challenges in our urban centers like Chicago and Atlanta, you know that IMAN’s work and reach must continue to grow and deepen to fully reach both the urgent need and its dynamic potential. Supporting their ‘Off the List, On the Love’ Ramadan Fundraising Drive is the perfect way to do that.