Recently, Congressman Danny Davis visited IMAN for the first time. I have known Congressman Davis for over 20 years and he is a compassionate and long-standing national advocate for community health centers and the formerly incarcerated. 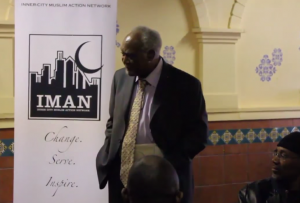 Congressman Davis spent four hours with us on a Sunday, touring every facet of IMAN’s work. He shared a powerful story about his grandfather, who told a young Congressman Davis that: “He would rather see a sermon, than hear a sermon any day.” The Congressman went on to say that, although he missed his Sunday Church service that morning to be with us, he felt fully satisfied because he “saw a mighty and powerful sermon in the work of IMAN.”

I came to IMAN’s Board of Directors, while leading Kennedy-King College in Englewood, because I see the need for IMAN’s work. As co-chair of the Board, I, like Congressman Davis, see in it the power to transform individuals and uplift communities. I urge you to helpIMAN expand and deepen those efforts, allowing us to be that Prophetically inspired “sermon walking”. Please help us reach our 2015 Ramadan Drive goal by encouraging friends, family and colleagues to make a tax-deductible, zakat-eligible donation to IMAN. Have a blessed and beautiful month.

Many Thanks,
Clyde El Amin
IMAN Board of Directors