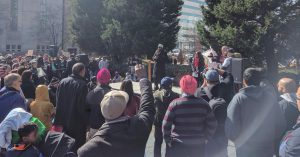 IMAN Atlanta has been extremely active as it continues to carve out its place in the larger metro area. The Atlanta Green ReEntry cohort broke ground on its first renovation project along with dozens of local volunteers. In addition to launching the reentry work, IMAN ATL staff and leaders played key roles in several interfaith efforts that successfully highlighted the importance of health, wellness and healing in an inner-city context.

IMAN Atlanta played a key organizing role during a well-attended rally held in downtown Atlanta. Alongside allies from Redeemer Lutheran Church and other organizations, they called on residents to band together in support of groups targeted by proposed federal policies.

In conjunction with the Interfaith Children’s Movement, IMAN Atlanta staff and leaders also traveled to the state capitol for an important Advocacy Day. They pushed local legislators on several critical issues affecting the state’s youth, from increased job opportunities to more equitable, accessible public services for young people of all backgrounds. 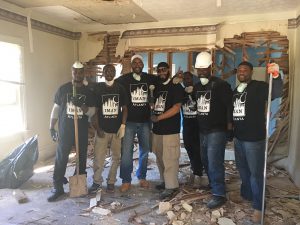 On February 25, Director Mansoor Sabree and Atlanta Green ReEntry Coordinator Jermaine Shareef organized a “Hands On” community event, which served as a public groundbreaking for the IMAN ATL team’s first renovation project. Nearly 50 community members joined the first-ever Atlanta re-entry crew for a tour of the new property. After the tour, many attendees also rolled up their sleeves and chipped in to help beautify IMAN ATL’s soon-to-be headquarters.

IMAN Atlanta continues to establish itself as a vehicle for Georgia residents to engage the issues most directly affecting them. Be sure to follow IMAN ATL on Facebook to support their work, and for all the latest news and updates.