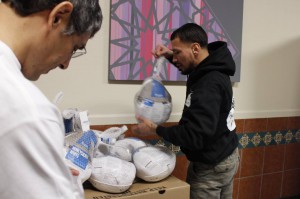 When residents of Chicago’s South Side hear the word “jihad”, they think of the man who brings them turkeys every November. Jihad Shoshara, past recipient of the IMAN Community Impact Award, spearheaded the 15th Annual Chicago Muslim Turkey Drive. With helping hands from the Mohammed Webb Foundation, Sabeel Pantry and IMAN, over 600 turkeys were distributed to local families on November 24th.

The success of a large-scale initiative like the Turkey Drive depends on a total team effort. IMAN organizers contacted residents and spread the word through our community partners. Youth leaders and Green ReEntry brothers provided crucial support as they unloaded, bagged and delivered turkeys. IMAN staff managed a high volume of calls and stayed after hours to accommodate late-comers. 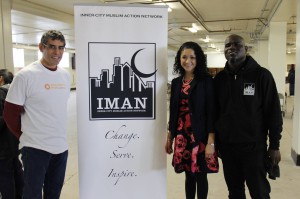 In a media landscape that demonizes both Muslims and the inner-city neighborhoods such as the one that IMAN resides in, this year’s Chicago Muslim Turkey Drive countered that narrative by giving away a record 1,500 turkeys at three different sites.

Special thanks to our beloved community partners at Fairfield Elementary Academy for their support; over 120 turkeys were distributed at the school alone. For a complete photo recap of the Chicago Muslim Turkey Drive, visit our Facebook page.