Habib Umar at IMAN: An Opportunity for Spiritual Rejuvenation

On Saturday, March 26, IMAN was honored to host Habib Umar bin Hafiz, a renowned scholar and spiritual leader, currently on his first tour of the United States and Canada. The IMAN visit was the first of his many engagements during a two-day trip to Chicago. 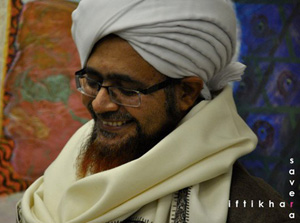 IMAN as an organization and many of the individuals – staff, board members, leaders, etc. – associated with it are motivated by “spiritual convictions about community service, human compassion, and social justice.” However, as Rami Nashashibi, IMAN’s Executive Director, noted in his opening remarks during the reception honoring Habib Umar, this spiritual foundation can be weakened by the physical and psychological trials accompanying the day-to-day work for social change and service in our communities. As such, Nashashibi pointed out, this spirituality is constantly in need of rejuvenation and nourishing. He hoped that Shaykh al Habib Umar’s visit to IMAN would provide an opportunity for such rejuvenation.

Habib Umar founded and runs Dar al Mustafa, a center for traditional Islamic scholarship that currently hosts an array of international students, in the Hadhramaut valley, along the Gulf of Eden. This area has been a seat of traditional scholarship and learning for centuries. His influence through scholarship and teaching is vast in Indonesia and East Africa. In July 2008, Habib Umar partnered with Muslim Aid Australia as founder of a local non-governmental organization (NGO), Al Rafah Charitable Society, to address issues of poverty and hunger and lack of sufficient health care that affect areas of the Hadhramaut valley.
Habib Umar’s visit started with a tour of the IMAN’s offices, including the Health Clinic, and the Project Restore and Green Reentry houses. Toni Foulkes, Alderwoman for the 15th Ward, was also present on this occasion to welcome him to the Southwest Side of Chicago. During the reception that followed, IMAN staff gave Shaykh al Habib Umar an overview of IMAN’s work in the three main areas of direct services, organizing and advocacy, and arts and culture. He seemed moved by IMAN’s commitment to the betterment of the community it is a part of.

This became clear as he started his remarks by reminding everyone of the fundamental Muslim dictum that undergirds much of the IMAN work: “Most beloved of God’s creatures to Him are those who are most beneficial to others,” and by thanking IMAN and its staff for “fulfilling a communal obligation upon all Muslims” for building up their communities. In the style of true spiritual teachers, however, he quickly turned his comments to the need for personal and spiritual accountability: “From time to time review your own levels of spiritual ascension, because a Muslim when he is striving [to do good] may become unaware of some of the attributes of his own [internal] quality and state.” He also notes that “attention should be paid to the presence of the heart with the One for whose sake we are doing this [work].” In other words, continue to try and do good, but also keep a check on yourself and your ego, and always remember why and for whom you are doing this work. Sound spiritual and practical advice, indeed. Shaykh al Habib Umar ended his remarks with a prayer that moved many of those present to tears.

After the reception, Habib Umar also spoke at an event hosted by IMAN at the Chicago Islamic Center on 63rd Street. This talk was titled “Spirituality & Community Accountability,” and gave the local community a chance to meet and listen to the distinguished scholar.

Habib Umar’s visit to the IMAN and his interaction with staff, board members and leaders was just the kind of spiritual renewal, not to mention accountability, that many of those in attendance were hoping for. They felt rejuvenated and ready to take on the formidable challenges that always lie ahead with a renewed sense of purpose and meaning.