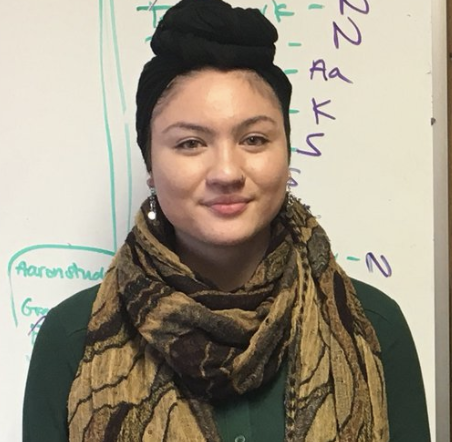 I’m Katie Marciniak, IMAN’s youngest board member, and I have been deeply and personally impacted by this year’s critical ‘Off the List, On the Love’ Ramadan Drive.

I know firsthand what it’s like to be on a list associated with failure and frustration, a list meaning that folks have given up on you. I graduated from Gage Park High School in Chicago, a school constantly under threat of being shut down because we were “under-enrolled” or “underperforming”.

The Southwest Side is my home, where I was born and raised. Alongside my high school classmates, I was blessed to engage in impactful activism that led me to discover IMAN. As an IMAN organizer, I have helped to mobilize community members to build the city’s first permanent memorial to Dr. Martin Luther King, Jr. and the Chicago Freedom Movement; increase local access to fresh foods via our Corner Store Campaign; and I’ve worked at the board level to continue building IMAN as an organization proactively responding to the intense needs of the community.

Unfortunately, those needs and challenges too often result in our people being on all the wrong lists. There are nearly 200 men on the waiting list to get into our Green ReEntry program right now, dozens of people waiting up to six months to receive behavioral health services, and hundreds of returning citizens who are currently waiting to be removed from an unfair registry list.

Saturday, May 19th would have been Malcolm X’s 93rd birthday and while our staff in Atlanta and Chicago gathered to reflect on his legacy and its connection to our work on that day, I represented IMAN in Washington D.C. at a national convening of organizers engaging the most pressing social justice issues of our time. I was incredibly moved by the transformational love that drives these organizers to continue courageously uplifting their communities, and felt proud to be doing that work at IMAN.

Your support helps to power our continued efforts to remove barriers to health, wellness and healing. As we all seek the blessings of Ramadan, please consider making a tax-deductible, zakat-eligible donation to our Ramadan Fundraising Drive.