IMAN and JCUA: Partners in a Housing Initiative

IMAN, in partnership with the Jewish Council on Urban Affairs (JCUA) and the Southwest Organizing Project (SWOP), is sowing the seeds of a dynamic housing and community development initiative on Chicago’s Southwest Side. Together with community leaders, residents, and other stakeholders, IMAN, JCUA and SWOP are endeavoring to take on a piece of the massive foreclosure crisis that has plagued this part of the city for a decade.

The relationship between JCUA and IMAN has been intentional and purposeful; for years, the two organizations have worked together on projects ranging from the arts to internal staff development. Furthermore, both JCUA and IMAN have a shared history in the Marquette Park neighborhood. It was once home to both a large Jewish community and a sizable Muslim population at varying times. In 1966, Rabbi Robert Marx, the founder of JCUA, was a member of the delegation that marched through Marquette Park with Dr. King, demanding equal housing rights for people of color. Though decades have passed since then and the neighborhood continues to change, it is no coincidence that even today the Marquette Park community is still fighting for the very same thing: equal housing opportunities and the right to live in a safe and prosperous community. 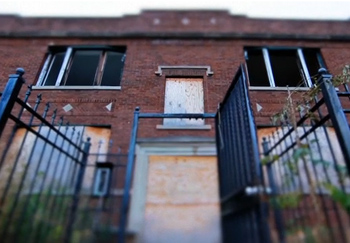 Now IMAN and JCUA, both organizations that already do work around housing and community development, have partnered with SWOP, an organization that has been working aggressively on housing and foreclosures in the area for over a decade. This emerging initiative adds another component to SWOP’s broader campaign, dealing particularly with the issue of vacant, vandalized, and foreclosed homes that often contribute to the decay and even violence that afflict these communities. The three organizations have been meeting with community leaders and stakeholders to make plans for this initiative that will enable residents on Chicago’s Southwest Side to reclaim their spaces and to take strong steps towards rebuilding and reuniting their communities.

This initiative is one that not only has the potential for Chicago Muslims, Jews, and Christians to come together to redefine/revolutionize the idea of space, but that also seeks to take a firm stand to restore the dignity of and justice for a community that holds such historic and intrinsic value to all of our communities.