As a grassroots organization fighting for social justice in some of the most marginalized neighborhoods in Chicago, IMAN believes in the importance of not only providing services to those who need it and working to build community locally, but also in striving to fix the systemic issues that help to marginalize and subjugate low-income communities of color. One of the major mechanisms by which IMAN attempts to affect policy change is as a member organization of the United Congress of Community and Religious Organizations (UCCRO). 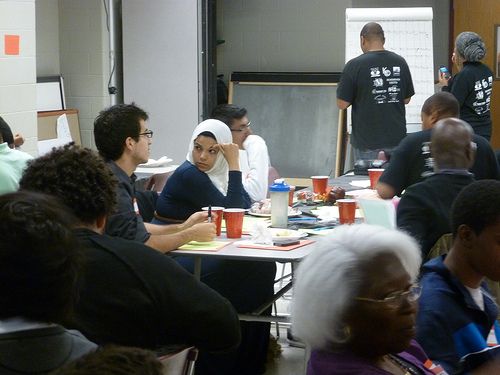 UCCRO is a grassroots-led multiethnic human rights alliance mobilizing people, policy and ideals for the equitable advancement of marginalized communities, and IMAN is one of its founding organizations. The UCCRO Annual Convention for 2012 was held on Saturday, September 22 at Madero Middle School in the Little Village neighborhood. It featured the stories of UCCRO leaders, and engaged them in learning about and voting on the UCCRO policy platform. IMAN leaders turned out in full force to learn about UCCRO’s policy priorities for the Illinois legislature’s upcoming veto session, and to vote on the platform that member organizations would be pursuing with various levels of government.

As a result of discussions and voting at the Convention, UCCRO will be focusing on six issues affecting various segments of our constituencies at the upcoming legislative session.  These include advocating for: (1) an elected school board for the city of Chicago, (2) driver’s licenses for all Illinoisans (including un-documented residents), (3) fair and legal districting of prisoners, (4) renter protection for those living in foreclosed properties, (5) funding for youth employment opportunities, and (6) removing crucial education and employment barriers for youth by making expungement of youth records easier and more efficient.

IMAN staff and leaders will be joining other UCCRO member organizations down in Springfield several times this session to advocate for these issues with policymakers and legislative staff. By maintaining long-term alliances that bridge cultural, racial, ethnic and religious divides, and that are deeply grounded in a sense of mutual trust for one another, IMAN hopes to further its commitment to a common vision and strategy for uplifting change.