Led by Regional Organizer Mansoor Sabree, the IMAN Atlanta Project gained significant traction in all aspects of its mission this past month, from aligning with local legislators on pressing social justice issues to setting the stage for April’s first-ever CommUNITY Café in Atlanta.

In early March, Sabree traveled to the Georgia State Capitol as a part of the Georgia Justice Project’s annual Lobby Day. Upholding IMAN’s commitment to criminal justice reform, he drummed up support for Georgia Senate Bill 367, which is designed to remove barriers to employment that employment that impede the reintegration of the formerly incarcerated into society. The IMAN Atlanta team stays in close contact with the Chicago headquarters in order to align with its efforts to pass the Removing Invisible Bars Bill (Illinois SB 2282), which is focused on substantial parole reform measures. 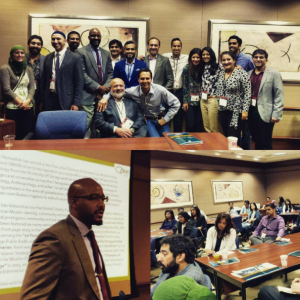 Be sure to mark your calendars for Saturday, April 23rd, which will be the first CommUNITY Café held in Atlanta. CommUNITY Café: 1000 Mile Journey is headlined by Washington, D.C.-area rapper Oddisee, and will be the IMAN Atlanta Project’s entrée into the storied Georgia arts community. Follow IMAN Atlanta on Facebook for the latest news and updates!