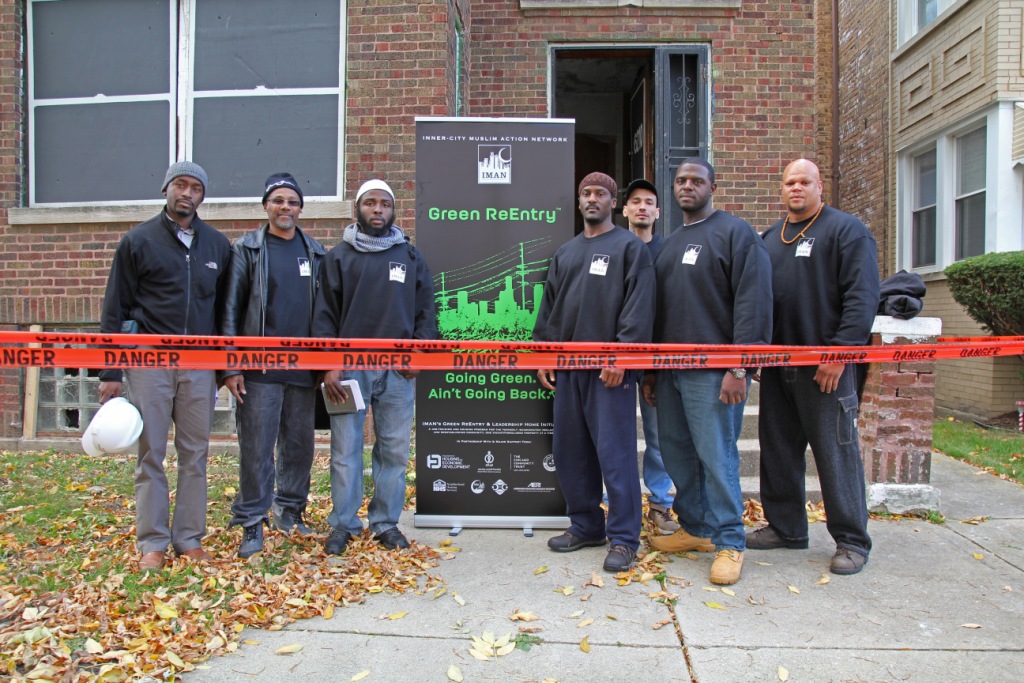 It’s official! IMAN’s new Green Reentry Crew has been selected, activated and is already making great strides in the Green Reentry Rehabilitation and Training program targeting foreclosed and vacant buildings in the community. We wanted to take a moment to introduce them to you, so you can remember them in your thoughts and prayers as they move towards the program goals over the next four months.

First, there is our team lead Brother Levie Jackson who says, “I was ecstatic about being accepted into a program that is Islamic based.  I was surprised that one existed. I’ve been home for 2 months, but with the help of this program and my family, the transition was not that hard.”  Next is Jose Jimenez, who also lives in our leadership home and was a recent graduate of the Sweet Beginnings program in Lawndale. Brother Jose is a Level II apprentice in the program and says, “I feel excited that I was accepted with open arms and no bias or anything like that.  I was made to feel really comfortable regardless of my background.” We also have Charles Farmer, another Level II apprentice. Brother Charles has been home for a little over three months and feels that before starting the program he had some struggles with job placement, money and movement. But since starting the program with the resources that IMAN brings, he says that things are starting to fall in place as time goes by. He goes on to state that, now, he feels better about his options.

Finally, we have our Level I apprentices Jamil James and Fahmi Jones.  Brother Jamil has been a resident in the Leadership home for little over a year, while Brother Fahmi has been volunteering with IMAN since his return home.  Both are thrilled about the opportunity to work with IMAN’s Green Reentry Program and we are excited to have them onboard.  More than workers on a construction site, the Green Reentry Crew members represent a group of key leaders deeply invested in improving and affecting the health and wellness of the larger community. Again, please continue to keep them in your prayers.