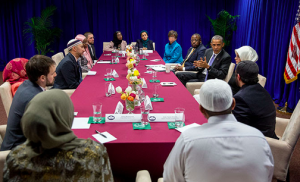 President Barack Obama visited the Islamic Center of Baltimore on February 3, his first visit to a mosque in the United States. Before addressing the congregation in Baltimore, and the nation at large, President Obama met privately with a dozen prominent Muslim Americans. Executive Director Rami Nashashibi was at the table, sharing updates and reflections about IMAN and highlighting Muslim Americans’ contributions to the betterment of society.

The following day at the National Prayer Breakfast in Washington D.C., the President related another story that Rami had shared with him; a story about courage, faith and conviction. President Obama also mentioned Dr. Martin Luther King, Jr.’s impact on Marquette Park, a legacy which, God wiling, will be enshrined this summer as the Martin Luther King, Jr. Living Memorial.