In the beginning of April, I had the exciting opportunity to travel to Pakistan and meet with artists shortlisted for the Center Stage program. Center Stage, supported by the U.S. State Department, is an exciting program that utilizes the power of the performing arts to connect cultures through a public-private partnership. The trip, however, played an even more significant role for me because of my personal connection and heritage. My last trip to Pakistan was in 2003 for my sister’s wedding and up until that point, my many trips to Pakistan consisted mostly of meeting with family in Karachi. Although I was familiar with Pakistan’s rich cultural heritage and a thriving music scene, it didn’t move me much in my teens or early twenties. 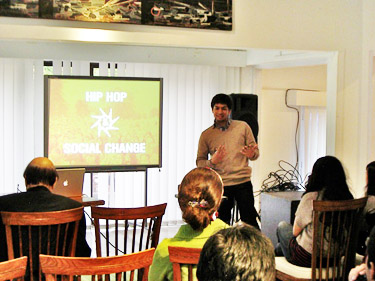 However, through my work with IMAN, I have developed a deep interest in the music, art, culture, and philosophy that has developed over centuries in South Asia. I also realize the impact that art and music in particular has had on social change in the region. I knew that this trip would be important and profound and that I would get a renewed sense of appreciation for the rich culture of this land. Yet, I was not prepared for the completely life-changing impact the trip has had on me.

From the moment we landed, we were exposed to the thriving youth culture in Islamabad, a constructed capital city that until recently was known for being a sleepy town with no culture of its own. From the independent music scene we witnessed at “The Rock” to meetings with the band Noori to the young people at “Kuch Khaas – Center for Art, Culture, and Dialogue”, I felt the energy and connection to young people fighting for change, while still trying hard to hold on to their identity.

Our visit to Karachi, the largest city in Pakistan, magnified this feeling as we were served healthy doses of traditional and contemporary culture. In a meeting with comedian Saad Haroon at the Peace Niche and T2F (The Second Floor), I made the realization that the parallels of art, culture, and social change truly are universal. The mission and goals of the Peace Niche sounded almost too familiar. I felt like I had walked into a parallel vision of IMAN… except in an entirely different continent. However, it was later that week when it all came full circle. We were treated to dinner by Fareed Ayaz and Abu Muhammad, Sufi Qawwals who have an authentic lineage going back to the beginning of the genre. Fareed Ayaz in clear and simple words, and almost flawlessly, connected spirituality and music in the context of modern Karachi, with all its deep social issues and its tremendous potential. At that moment, I realized what we really mean at IMAN when we say connecting the local to the global. The collective desire to change our reality for the better is greater than any individual, organization, or community.