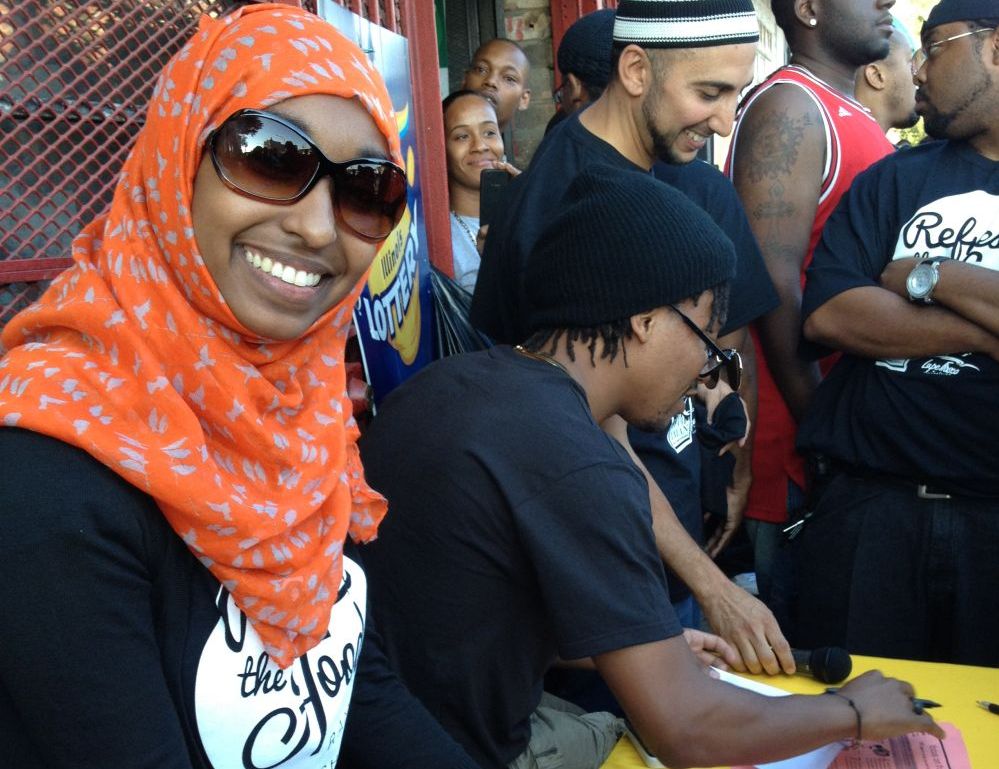 Zeinab Bakhiet recently joined IMAN as an Executive Fellow. The Executive Fellowship is a one-year program that exposes the Fellow to a broad range of IMAN’s work and aims at building a functional understanding of community organizing and advocacy, donor cultivation, fundraising, and non-profit administration and management.

Last Ramadan, IMAN launched the Refresh the ‘Hood Challenge, a month-long initiative seeking to confront issues of food access through community engagement, which stems from Muslim Run: A Campaign for Health, Wellness, and Healing. Every Tuesday and Thursday afternoon during Ramadan, IMAN leaders and staff set up shop in front of two partner stores distributing free fruit smoothies to promote subsidized produce sold inside the stores. During these visits, IMAN leaders engaged community residents in dialogue, and encouraged them to think deeply about the disparities in food access and to envision how healthier options could impact their communities. In addition to challenging the community members to see if affordable alternative food options can influence healthy choices, we also wanted to challenge local storeowners to use Ramadan as an opportunity to tackle stereotypes around the corner stores by first working to nourish the community.

IMAN partnered with the Lupe Fiasco Foundation on this challenge and hosted an incredible kickoff event in front of Payless Grocery on July 31, which featured a surprise visit from Lupe Fiasco himself. Our team of staff and leaders gave out over two hundred fresh fruit smoothies, conducted surveys, handed out information packets about nutrition, and met with community residents. Visitors also enjoyed a nutritious vegan meal, courtesy of Brother Zarakyah from Soul Vegan. By the time Lupe arrived, the crowd was well fed, and excited to take pictures with and receive autographs from the hip-hop star and activist.

The most poignant moment of the day came just as Lupe was about to leave, when a youth from the block muscled his way through the mass of people surrounding Lupe and asked for thirty seconds to spit his rhymes. Lupe gave him the go ahead and listened intently at lyrics that were peppered with references to violence, gangs, and drugs, all a reflection of the negative influences in his environment. At the end, Lupe genuinely complimented the youth on his artistic skills, but then challenged him to take a more creative approach by using his talent as a beacon of light and hope, rather than to serve as a mere reflection of the negative influences in his environment. The interaction can be applied more broadly to what we at IMAN are attempting to do through our Muslim Run campaign: to see the potential in existing resources and then agitate for positive change.

In many ways, Refresh the ‘Hood was, for me, the ideal introduction to IMAN’s programs, partners, and beneficiaries. In addition to seeing Lupe Fiasco in action, I was able to witness a group of staff and leaders take to the streets and engage with community residents in ways that are important and meaningful. For instance, there were leaders like Sister Anam, who conducted countless surveys, but then stowed her pen and clipboard away, and listened with understanding and compassion as a brother explained how poverty had forced him to fast that day, even though he was not Muslim. I also witnessed the radical generosity and unwavering commitment of our partner organizations–the Lupe Fiasco Foundation, Al Bawadi, and Soul Vegan–who gave immensely of their time and resources.

When I began my fellowship, I knew that many complex dynamics were at play on the South Side of Chicago and that issues of race, faith, politics, and differential access to resources are all a prominent part of the work we do at IMAN. But I also knew that the staff and leaders I would meet at IMAN are both highly ready and profoundly inspired to tackle these issues. I am blessed to have been a part of Refresh the ‘Hood this Ramadan and I look forward to seeing how this effort impacts the larger Muslim Run campaign.