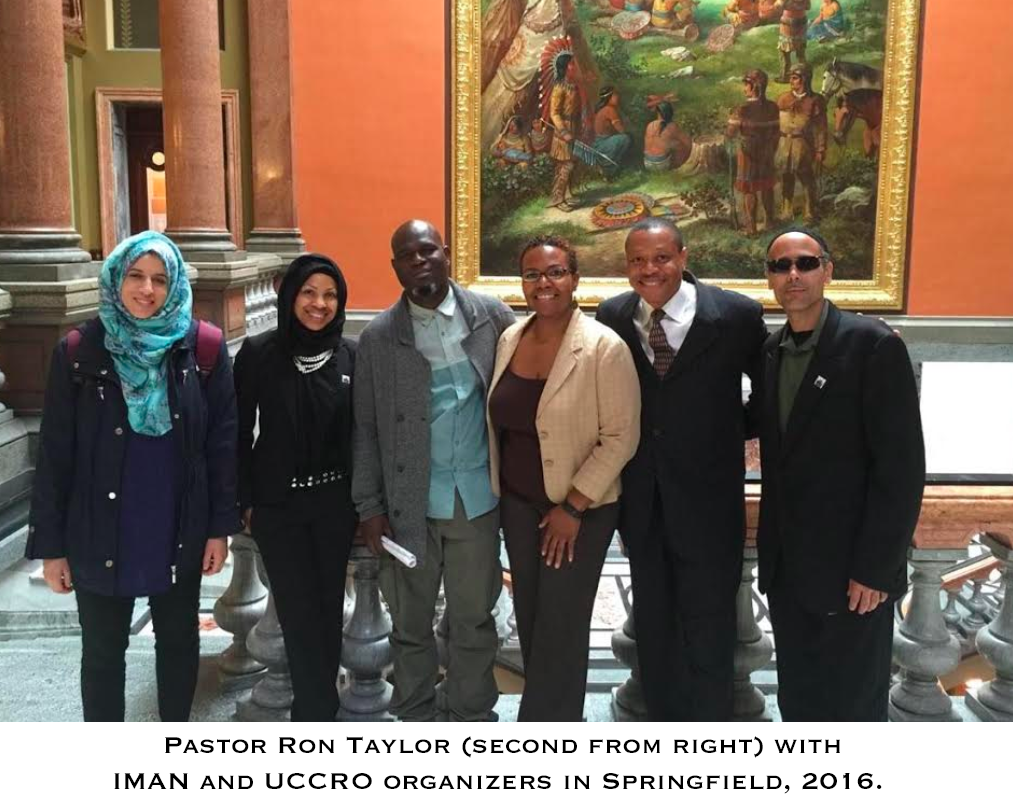 Pastor Ron Taylor, a devoted community organizer, faith leader and one of IMAN’s dearest allies, passed away on January 20th, 2018. Lovingly known as “Pastor Ron”, Taylor was one of the founding members of United Congress of Community and Religious Organizations (UCCRO), where he served as Executive Director. He was also the founder and Senior Pastor of Disciples for Christ Church in Oak Lawn, Illinois.

Pastor Ron worked diligently as a faithful servant and a compassionate community leader, always uplifting those around him. At UCCRO, he dedicated himself issues such as criminal justice and immigration reform advocacy, and worked relentlessly to connect communities across racial and religious lines. Pastor Ron was a passionate organizer and ingenious leader, but most of all he was a friend.

IMAN staff who worked closely with Pastor Ron over the years shared their reflections on the profound impact he has had on their lives:

“I had the pleasure of working closely with and being mentored by Pastor Ron for over 10 years. In every open forum or internal strategy meeting, I’ve always referred to him as our “Muslim Pastor.” He truly was a shining example of leadership from behind the scenes, walking humbly while being a strong force for good. He championed working across divided communities, and taught me how to envision what our communities can become. It is with many tears, I can truly say that I loved Pastor Ron with all my heart. His legacy will live on through my work, but his loss will most definitely be felt in many organizing spaces where he left a big mark in the work.”

“Before I officially started working in Development, I was IMAN’s main staff person assigned to the UCCRO team and Pastor Ron was the main staff member from his organization at the time. The UCCRO team met twice a month, traveled to Springfield together dozens of times per year, and planned advocacy events with one another. The year that Pastor Ron became the Executive Director of UCCRO was also the year I formally transitioned into IMAN’s Development Department and passed my UCCRO hat to one of my other IMAN colleagues. One of my favorite memories of him happened that year, when I attended the annual UCCRO Convention. I walked in the door and the first person I saw was Pastor Ron. I told him that I wasn’t quite sure how to just be a participant at UCCRO events, that it felt wrong to not be one of the organizers like I used to be. I remember him raising his eyebrow and giving me the huge sideways grin that he always wore and saying, ‘Alia, the Lord just answered both our prayers because our emcee just called in sick and we don’t have anyone to replace her, so congratulations, you’re our new emcee!’ And that was Pastor Ron: he led with grace, put people to work where he knew they would thrive, and always trusted in God to make things right at the end of the day. I will miss him so much.”

“In 2015, during the Dyett High School hunger strike, the organizers staged a sit-in at city hall. It felt a little somber–while the fight around Dyett was some of the most inspirational organizing I have witnessed in Chicago, it was all still cloaked in the undeniable reality of the lengths that black and brown communities have to go through to prove their humanity and deservingness. At some point, Pastor Ron, who I had been sitting next to, got up and starting leading the entire group in a spiritual. It was a beautiful moment where I could feel the power of the collective through the undeniable power and leadership of Pastor Ron.”