SB 2282 Passes Through Illinois Senate, Moves on to House

After months of advocating, educating and rallying community members, IMAN organizers and leaders celebrated the passage of the Removing Invisible Bars Bill (SB 2282) through the Illinois Senate on April 22. 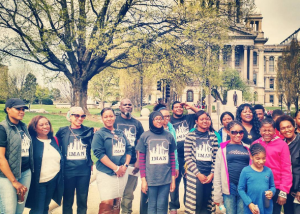 SB 2282 was drafted under the leadership of Green ReEntry Housing Coordinator Nasir Blackwell, who himself is impacted by the harsh parole technicalities faced by the formerly incarcerated. Now the organizing team’s focus turns to the state House of Representatives, with passage through that legislative body pushing Illinois one step closer to commonsense parole reform.

Organizers devoted extensive time and effort in April in order to secure the necessary support for SB 2282, traveling to Springfield several times to meet with legislators. The trip to the state capitol, during the CIOGC-sponsored Illinois Muslim Action Day linked IMAN’s push for parole reform with the calls for reduced school arrests and other initiatives led by Equal Voice ally organizations such as Communities United. 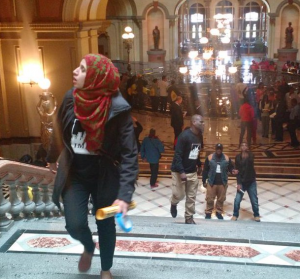 In the weeks to come, IMAN organizers will continue the Removing Invisible Bars campaign with an intense focus on garnering support in the House of Representatives. You can play a crucial role in helping to bring real, impactful parole reform to Illinois by contacting the following legislators and telling them that you believe in the Removing Invisible Bars bill: Elaine Nekritz, Barbara Flynn Currie, Elgie Sims, and Lashawn Ford.

Interested in joining the team of organizers and leaders pushing to remove the invisible bars? Contact Shamar Hemphill today to get plugged in.