At IMAN, “we believe that the Prophetic principles of compassion, service and justice, informed by local and global organizing models, can be transformative forces for creating social change.”  This fall, recent Al-Azhar graduate & IMAN’s Grow Your Own Scholar, Ubaydullah Evans, led an eight-week course, called IMAN Reflections, that highlighted aspects of the Prophetic biography and tradition that inspire and undergird our work of social change and uplift in urban communities. 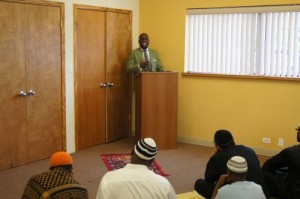 Every Wednesday, for the last seven weeks, the interactive class has examined a different aspect of the Prophet’s life and reflected on how the prophetic tradition informs IMAN’s social justice and organizing work.  Every class brought 40-50 IMAN leaders together in a conversation, led by Evans’ framing of prophetic life, over spiritual and social healing in our time and space, and how that can help us come together to meet the challenges in our communities.

At a time where senseless violence, failing schools, foreclosure and lack of jobs continue to plague low-income communities on the South Side of Chicago, where IMAN does its work, we understand the critical need to create a space that connects the larger Muslim community and the South Side community we directly serve, in an effort to bring spiritual and social healing to both.  The series is an effort to develop an understanding of the Muslim tradition that can help us speak and act meaningfully in the face of our greatest challenges, and to bridge that tradition with the organizing work of IMAN.

Based on attendance and participation levels, the deepening engagement of current leaders with each other and IMAN staff, and the real possibility of engaging new leaders, the classes seem to have been very meaningful and successful.  The last class in this session will be this Wednesday, December 5.  Then, the classes will resume as we start a new session in early 2013.