“Come on, stop faking, y’all never cared about no Juneteenth,” said a longtime friend and fellow organizer regarding the newfound awareness and enthusiasm that many of us non-black folks are expressing this year for the long-neglected holiday. Let’s be honest. I certainly never grew up with any awareness, let alone any meaningful observation of this day and I’m fairly confident I am not alone, at least among many of my fellow children and descendants of immigrants from all over the world.

Yet, as true as my friend’s critique is, I’m also moved by the equally powerful words of IMAN Roster Artist and activist who may soon, inshaAllah, become the youngest, freshest and flyest city councilman representing Louisville in Kentucky’s political history. During yesterday’s special Juneteenth-edition IMAN InnerNet Cypher, Jecorey “1200” Arthur declared Juneteenth as a day with global significance.

Jecorey, an educator and amazing multi-instrumentalist hip-hop artist from Louisville’s West Side, was only reinforcing what leaders like Malcolm understood and spoke about over half-a-century ago: that oppressed people across the globe intuitively understood their links to the black-American struggle for liberation. Jecorey’s role on the Black Lives Matter frontlines in Louisville right now gives him unique insight. He also happens to be born on Malcolm’s birthday (May 19th-another holiday) and raised in the very ‘hood that gave the entire globe the most beloved and popular symbol of black liberation the modern world has ever known: Muhammad Ali.

In fact, not so long ago in the pre-COVID 19 era, when people regularly flew across the globe (remember those days?) I was honored to be invited to serve as guest faculty guide with my colleagues Dr. Rabbi Rachel Mikva, Dr. Zachary Moon and Chicago Theological Seminary President Dr. Stephen Ray to an intense CTS two-week study excursion across 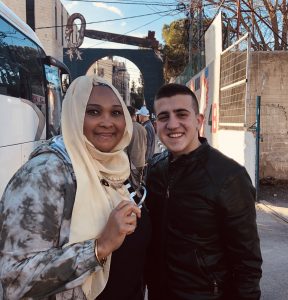 Israel/Palestine. With the support of Bayan College I was able to secure a scholarship to invite my dear sister Maryum Ali, Muhammad Ali’s eldest daughter, to the trip.

Among the most powerful moments with Maryum during those two weeks was our walk through Al Aida Refugee Camp in Bethlehem. There, I looked for a young Palestinian that I had met a few years ago who, with his father, started a small stand selling jewelry made from metal extracted from rubber bullets and tear gas canisters regularly hurled at protestors in the camp. When I found him, I was elated to see that his little stand had grown into a more developed store and that he was now a teenager running it on his own. I bought some of his goods and told him that I was there with a group of students from the US and that the daughter of Muhammed Ali was among us. He leapt from behind the desk and implored me to allow him to hand-deliver to her a gift from the store. Everyone was about to board the bus but I connected them just in time and snapped a photo that captures this young man’s delight.

You see, his excitement wasn’t animated solely by meeting the eldest daughter of the globe’s most beloved athlete. Without any full awareness of critical race theory, or a degree in African American History, this young Palestinian refugee from Bethlehem understood that oppressed people across the globe are not truly free until black people in America are free.

It’s why even after having seen in person the amazing artwork and murals on the side of Cup Foods in South Minneapolis where George Floyd was choked to death, the most piercing mural that stood out to me was one drawn thousands of miles away from that location. It was amid the barrel-bomb induced rubble and horror in Syria that refugees drew, what was for me, the most powerful image of George Floyd on the last remnants of a destroyed home.

Again the message was clear, even after enduring the unspeakable horror and genocidal carnage that those refugees have had to live through the last four years, they still understood that their freedom and liberation was intrinsically connected to the true freedom and liberation of the most oppressed people living in the world’s most powerful nation.

So, yeah, my friend is still right, many of us reading this probably never did know or care much about Juneteenth prior to this moment. Yet, perhaps with the special blessings of the Most High the promise in this difficult time is that more of us than ever are ready to do everything in our power to fundamentally commit ourselves to the true liberation of black people and communities in this country, especially those who have been catching the most hell for decades. I pray that everything we do and have done at IMAN over the years has helped us pave the way for how that liberation can practically look and feel on the ground in neighborhoods like Englewood, on Chicago’s South Side or the West End of Atlanta.

I humbly ask that you join me—at the very least on this day—to commit yourself, your time, your resources and your prayers to making “Black Lives Matter” and Juneteenth more than a hashtag or a temporary headline, more than a political moment or even more than another national holiday. Let’s commit to making this day a radically new referendum on the issue of race and racial disparities and injustice in America and let’s commit to centering black-American liberation as an integral part of our collective human liberation here and across the globe.

A Win, A Law, & A Seed: Powerful IMAN Arts Update

Arab and Muslim Communities Need To Talk About Anti-Blackness

First Feel Me, Then Heal Us