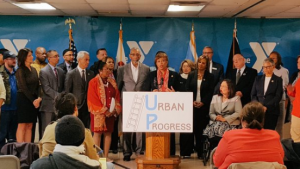 IMAN deepened its relationship with members of the Congressional Black Caucus this past month through several engagements with US Congresswoman Robin Kelly (D-IL 2nd District) and others. Executive Director Rami Nashashibi was invited to a Congressional Dinner hosted by Rep. Kelly, where he shared IMAN’s work and vision with legislators from across the country. The following morning, Nashashibi stood with Rep. Kelly at a major press conference during which she outlined her crucial “Urban Progress” initiative to combat increasing gun violence plaguing urban centers throughout the nation. IMAN was specifically mentioned as a model for holistic solutions to violence. 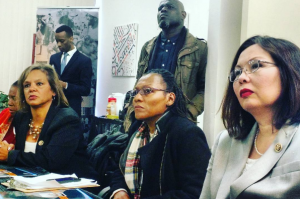 This historic engagement propels IMAN toward a critical national organizing effort, wherein community organizations from across the country will be mobilized for a massive action in Washington D.C. this fall centered around powerful criminal justice reform. For more information, contact Organizing Director Shamar Hemphill.