IMAN Takes it Up a Notch at ISNA Convention 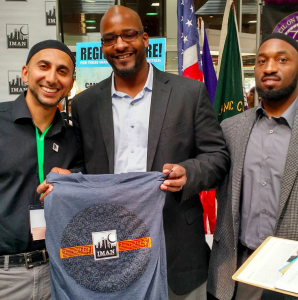 After months of preparation and extended meetings, ISNA finally arrived. Taking full advantage of an ideally situated booth, IMAN staff and leaders shared a beautiful energy and chemistry with convention attendees. A special “campus tour” stole the show though, as nearly 40 guests bused down to the Southwest side to experience firsthand the health, wellness and healing work underway at IMAN. Imam Suhaib Webb and Laila Muhammad joined the tour, sharing insight into why it’s crucial to support the organization. That same day, IMAN was given the 2015 Muslim Humanitarian Award at the Interfaith Humanitarian Banquet hosted by CIOGC.

Rounding out the weekend was the a convention-edition Organizing Training lead by Shamar Hemphill, Sara Hamdan and Rami Nashashibi. The demand was high for an interactive opportunity to learn how to organize in the inner city, and participants left feeling motivated and inspired to affect positive change in their own communities.

ISNA returns to the Chicago area for next year’s convention, and IMAN awaits another exciting weekend to connect with supporters nationwide.