During Memorial Day weekend, IMAN brought 70+ young men from six different Chicago organizations to Atlanta for a transformative and healing Green ReEntry Summit. The summit was largely made possible through the sponsorship of Chicago CRED, one of our closest community partners. Last Memorial Day weekend, Chicago saw a devastating 39 people shot, with seven ending in fatalities. In an effort to proactively minimize their exposure to such violence, these men were given the opportunity to travel for the weekend and temporarily escape the perils of Chicago summers. 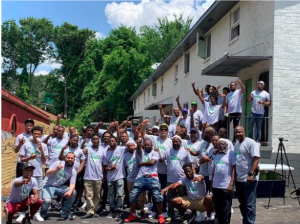 Each of these six groups were brought to IMAN Atlanta’s newest development site, a 10-unit apartment building, currently in its final phases of renovation. The guests from Chicago received a full tour of the facility, and an overview of the project’s vision and its projected community impact. They were also immersed into the typical daily routine of IMAN Atlanta’s Green ReEntry cohort. They participated in Tai Chi, stretches, drills, and shared personal “Words of Wisdom”–an exercise through which both cities’ cohorts could exchange reflections and realize commonalities between themselves.

During the opening session– resembling a reunion of long-lost brothers– the cohorts from Chicago and Atlanta bonded over their shared struggles through the process of transformation and empowerment. The groups then spent the evening breaking bread together at an interfaith ‘BBQ Iftar’* for Atlanta community members. It was only fitting that such an impactful day concluded with an evening of Southern comfort food and uplifting artistic expression performed by cohort members themselves. 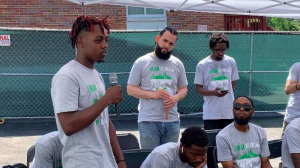 This summit, the first of its kind, provided a safe and restorative space for 70 men during a notoriously violent weekend. Continuing this tradition of a yearly summit has great potential to save lives, prevent men from becoming “another statistic”, and deepening a brotherhood.

*An ‘iftar’ is the meal which concludes the daily fasts for Muslims observing the holy month of Ramadan.