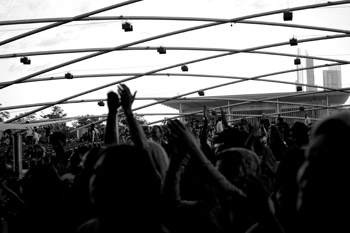 Chicago was alive with the sound of Muslim voices from across the globe on June 16th and 17th, with back-to-back IMAN Arts & Culture events. Dandana – A Celebration of Muslim Voices took place at Millennium Park on Thursday, and Community Café – A Celebration of Freedom was held at the South Shore Cultural Center on Friday.

Following the instrumental stylings of The Alim Qasimov Ensemble, the park came to life with Hakim’s arabesque beats and vibrant vocals. The sounds of the pop legend and his band filled the evening well into the night when his performance came to a close and the crowd dispersed. The outdoor concert took place as part of the Chicago Department of Cultural Affairs and Special Events’ “Music Without Borders” series. 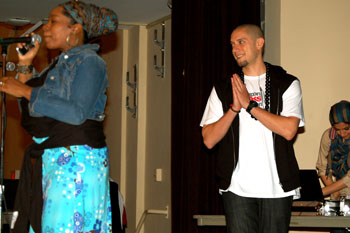 The hall soon switched from the sounds of Spanish to Arabic when R&B pop trio Tiraline took the stage. Visiting the U.S. from their hometown of Safi, Morocco, Tiraline brought a palpable energy to the event, and the audience grew in size as the night progressed. Just as with Dandana the night before, the Community Café comprised a beautifully diverse audience, with individuals from an array of cultures and communities gathering for the experience.

Following Tiraline’s performance, the Community Café came to an intermission as the crowd gathered for the evening prayer of maghrib. After the prayer, the audience took their seats for a final performance by Syrian-American hip hop artist Omar Offendum, whose words shed a poetic light upon the ongoing uprisings and revolutions in the Middle East, and the role of youth in impacting change. At times light-hearted and at others solemn, his performance closed the night with both laughter and insight.

The next Community Café is set to take place in September in conjunction with the Chicago World Music Festival.