Over the past month, IMAN leaders have been busy activating voters across key parts of Chicago’s South Side. From phone banking to door knocking to distributing Early Voting reminders, IMAN’s Organizing team strove to engage community members in the crucial 2015 Chicago Municipal Elections. The ‘Fresh Expressions: Legacy X’ event carried the themes of citizen action, political education and using the vote to build power. Immediately after the event, IMAN leaders mobilized the audience to cast their ballots at a nearby Early Voting location. Despite low overall turnout for this week’s elections, IMAN will continue to urge the community to make their voices heard in the mayoral run-off on April 7th. 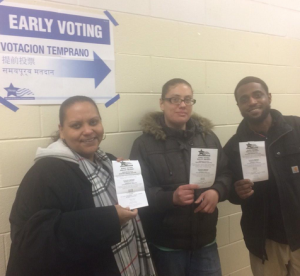